Timothy Goodman & Jessica Walsh
Being Vulnerable on a Public Platform

What happens when two designers set out to do a social experiment that reveals their vulnerabilities and insecurities? They publish a book, get tons of media coverage, and Hollywood comes calling with a movie deal. Then they start over with a new experiment. 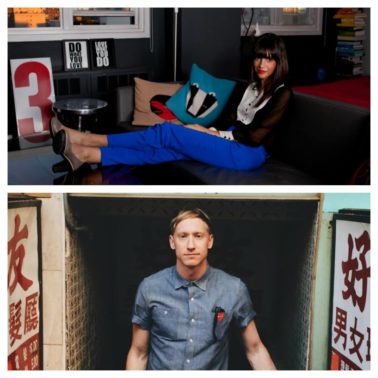 40 Days of Dating, 12 Kinds of Kindness, Quotes on Shit

Create dialogue and inspire action in others

Jessica Walsh and Timothy Goodman are well respected designers who have plenty on their professional plates already—Walsh as partner of famed Sagmeister & Walsh, and Goodman as a prominent designer, illustrator and art director. Both are based in New York city, and they teach at School of Visual Arts, as well. In 2013, 40 Days of Dating started as a personal exploration where Walsh and Goodman exclusively dated each other for 40 days, following a set of self-imposed guidelines including attending couples therapy, an entire day of holding hands (even in the bathroom), and a romantic weekend get-away. The entire experience was documented daily, with each recording their thoughts about each other and what they were feeling each day. This was the most real, reality program we’ve ever witnessed, and highly addictive. During the experiment, Goodman was asked by a friend why he was doing this, and he said, “I really believe it’s testing my capacity for intimacy.” That intimacy was ultimately viewed by more than 15 million people worldwide. The two didn’t become a couple, but they have remained close confidants and co-conspirators, and Walsh found her happily-ever-after with someone else.

Their latest project, 12 Kinds of Kindness, again took them way out of their comfort zone as they explored their own personal struggles in the past and how they dealt with them—and are still dealing with them—as well as how they respond to unwanted behaviors in others. The description on the site, says, “Two self-centered New Yorkers, often focused on what’s ahead instead of what’s around them, created a series of 12 steps as a way to become kinder, more empathetic people. As a resolution, they practiced this for 12 months.” Here, we talk to Goodman and Walsh about their motivations with each project, why they keep doing them, and how they feel about publicly revealing such personal experiences.

You two have done two public—yet very personal—projects together. Where does the germ of the idea start, and how do you get started?

Using our tools as designers, we believe we have unique abilities to tell stories in ways an audience hasn’t seen before. James Joyce says, “In the particular is contained the universal.” We’ve always believed that. With 40 Days, we learned that our issues are the same as millions of other people’s issues, and because we created something that was personal to us, it touched millions of people on a universal level. Luckily, we both have the same vision of the kind of work we want to put in the world. We’re both interested in merging our personal and professional lives more by using our tools as designers to have larger dialogues with all kinds of people. Documenting it with mixed media and releasing it in segments is a way for us to continue that story.

Since 40 Days of Dating, how has your personal relationship evolved? I know Jess has since married, but how did the intimacy and vulnerability affect your relationship with each other?

It was right after 40 Days of Dating ended that we started asking ourselves these questions. We regretted the way we handled things and felt sorry for the way we treated each other. We kept coming back to one word: empathy. Our relationship is unique, because we have both shared so many experiences together: best friends, dating, being exes, working together, teaching, etc. We challenge the hell out of each other and we’re brutally honest. So sometimes we drive each other absolutely nuts and we can fight over ridiculous things. Our relationship is a bit like brother and sister because we’re so close. We know we can say anything and be 100 percent honest and unfiltered with each other. And since we both have unique skills that help make the projects more robust, I think this tension makes our work better.

Being that vulnerable so publicly in 40 Days, was pretty mindblowing, as a reader. How did you deal with the popularity of the site and putting yourself out there?

Lena Dunham said something like, “Sharing your personal stories is a sort of activism. By sharing what’s personal to you, you’re connecting to other lonely people in the world.” We both subscribe to this idea, so it has made it a lot easier. Obviously, it’s not easy to put out so much personal stuff into the world. The reason for making our journey public was to share our feelings and inadequacies that we believe are largely universal, and to start dialogues about these topics which we find important. It was amazing on a personal level to go through this experiment, and it’s been inspiring to see how much it’s been inspiring others.

The reason for making our journey public was to share our feelings and inadequacies that we believe are largely universal, and to start dialogues about these topics which we find important.

Did your friends encourage 40 Days or did they think you were crazy?

They thought we were crazy. Many people didn’t really get it or understand why we were doing it, or why we’d release it. In fact, we had serious doubts about it, too. It took us a while to finally do it.

With 12 Kinds of Kindness, what was the craziest reaction you received from any of the acts you “performed”?

Talking about my past struggles with mental illness along with opening up about my sexual assault were definitely the most difficult. I thought I had long buried these feelings and secrets, but what I realized was that they were still very much alive and in front of me. Publicly talking about it made them lose their power for me and put them behind me. Timothy: Obviously, searching for and meeting my biological father for the first time was one of the most profound and anxiety-ridden things I’ve ever done in my life. I tried to avoid it for months. However, I must say that shaving my head to face my fear of my undeniable future of going bald was pretty hard. I know it sounds silly, but that made me depressed.

How has this experiment changed each of you personally and how you deal with others?

One of our goals with this project is that it will inspire others to see the apathy in themselves that we’ve seen within ourselves, and that it will inspire people to spread more love and kindness into the world. I can honestly say I’ve changed and become more aware of people around me that need help, even when I am not doing things for a camera or to write about. Even my husband comments on it all the time. Timothy: How often do people ever follow their resolutions? Not much. That’s why we feel, as we did with 40 Days, that in order to actually follow through with these experiments, we needed to create conditions and parameters that hold us accountable. We explored a lot of topics in this project, such as reversing roles with someone who annoys us, or doing random acts of kindness for strangers. However, the personal stuff we explored—such as facing childhood disorders, mental illness, and broken family ties—were some of the most profound experiences we’ve ever been through.

All the steps were incredibly personal … did you have a favorite or one that moved you more than the others?

Step 12 was about diving deep into what we’ve learned and to try to do something much larger than ourselves. Because the entire project has been about our relationship to ourselves and our relationship to the external world around us, we wanted to do something completely inclusive. We wanted to open up a platform about a relevant topic in order to hopefully start a dialogue. So protesting and building a “wall” in front of Trump Tower in New York, was definitely our most ambitious, audacious and most exciting. We got thousands of messages from people all over the world saying “Thank you.” And because it got some serious national news coverage, there was obviously a lot of different comments and different views shared.

What’s the next big project you two are doing?

We have new project ideas every other day. It’s just about choosing which ones are really worth dedicating our time to. That said, we’re going to release another fun visual project on Instagram & Tumblr soon. It’s similar to our Quotes on Shit project that we created two years ago between 40 Days and 12 Kinds. When will the 40 Days of Dating movie be made and who is portraying each of you?

The script has been written and they’re trying to get it “green lit” now. These things can apparently take forever, so who knows! Then they will attach actors to it.

IBM is in the midst of a design-driven transformation that includes educating its worldwide...