Mark Kingsley is as much a cultural anthropologist as he is a designer. Always seeking out the meaning and context in the world at large, and within branding and design specifically, has left him feeling at odds with traditional design metrics. 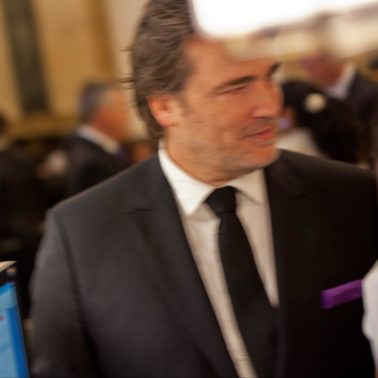 As a design critic and teacher, Kingsley explores the deeper meaning behind corporate branding strategy and invites his students in the discourse. He’s been a designer for 30 years, collaborating with countless agencies and art directors over the years. His first professional design project, was a record cover for a 1986 compilation of Bo Diddley covers, released by a pirate record label called Satan. In 2011, he founded Malcontent where he works in industries ranging from financial and retail services to arts, culture and music. Here he talks about staying true to himself, the importance of design criticism, and why it’s always best to look outside the design profession for inspiration.

Why would you call your studio Malcontent?

I admit, it is counterintuitive. Basically, it’s a way of keeping myself honest. The things I oppose run from the general to the specific: From the design profession’s submission to celebrity, the idea that the goal of design is craft and form, the rote and “proprietary” practices of branding firms … to my methods, my taste, or the limits of my thinking. Stating this publicly sets expectations—from clients, partners, and myself.

Besides, where does innovation and change come from? From satisfaction? I think not.

Why is design criticism important to the field?

First, some distinction: criticism is the identification and description of a phenomena and its context. Saying one likes or dislikes something, whether or not if it aligns with one’s taste, is opinion. It is the rigors of a criticism which comes from a theory/object background that rise it above opinion.
Contrary to the image of your typical designer in headphone isolation, working away at their computer; design does not operate in a vacuum. It both takes from and contributes to culture and visual language. Design is the applied tactic of business or political strategy. And design is the aesthetic manifestation of an ethical stance. These are significant metacontexts. And designers would do well to give a bit of reflective thought toward how their work operates within them.

What is the significance of your class, Logo Insignifica, and who attends?

Logo Insignifica was a pilot class I taught in the School of Visual Arts Masters in Branding program this past academic year. The name comes from a course taught at the University of Buffalo in the early 1980s. It was more of a general creative studies class, the type where you would read “Zen and the Art of Motorcycle Maintenance” as a metaphor.

I offered a workshop on criticism and critical theory, as applied to brand thinking. In the program, our students are taught a series of branding frameworks which reflect the wide variety of instructors’ backgrounds: hard business analytics, research, psychology, trend forecasting, or specific sectors of the market. The majority of the time in my class was spent in conversation, with the idea not to give students strict tools and frameworks with which to analyze brand design, but rather to introduce “different pairs of glasses” to expand their analytical vocabulary and approach.

Since branding is a sociolinguistic phenomenon, we began with a very broad set of definitions and descriptive models, including: structuralism, semiotics, information theory, Barthes’ mythologies, Derrida’s deconstruction, psychological theories of language formation, film theory, phenomenology, Marxist quibbling, graphic design hero worship, and whatever suited the moment. All done with the intention of introducing the fuzziness of contemporary brands, and subsequently giving permission to play—intellectually.

I should also point out that students in the program come from as wide a range of backgrounds as the instructors. They tend to be equally divided between American and international students, and equally divided between design and strategy, with a smattering of other backgrounds. We’ve had people come from microbiology, fashion, the music industry, and investment banking. Some come directly from undergrad programs, but the general consensus is that a few years of professional experience is best.

How will this class help your students develop into better brand designers?

Instead of “better brand designers,” I prefer the phrase “better branders.” Branding is an interdisciplinary profession which sometimes applies design tactics toward a strategic goal. I developed the class with the personal conviction that both design and strategy are critical acts: identifying context(s) and then adjusting or creating new context(s).

If you were a client, wouldn’t you prefer your agency to have a team of deep, critical thinkers with open, flexible minds?

Rather than following typical design/branding rules and guidelines in your class, you’re heavily versed in philosophers, inventors, writers, and the like. Why is that and why is it important in this context?

Simple. Garbage in, garbage out.

I originally got into design to be near music and musicians, eventually specializing in music packaging for much of my career. But as my experience developed, I realized that the best thing about being a designer was the ability to meet and work with a wide cross-section of humanity. And generally, they don’t give a damn about the trivial details of design. Those skills are merely your ticket to the table.

You have a greater affect and open more doors for yourself if you’re able to contribute something more than a point of view on the Helvetica vs. Ariel debate.

What is your pet peeve with branding today and its practitioners?

I have several, but my main pet peeve with brand agencies today is their fear. I’ve been to too many meetings where I hear words like bucket, bucketize, leverage, foster. or best practices. My preference is to speak English. As regular folks speak it. Branding doublespeak is an expression of fear. Fear of not being taken seriously. Fear of making a simple suggestion.

Another peeve is how agencies hire and maintain staff. When you’re owned by a publicly-traded holding company, there are constraints to who is hired and what the creative offerings are. Therefore, the more innovative brand agencies now tend to be smaller, independent firms with greater agility.

My pet peeve about design is that so much of it looks the same. Designers all see the same things online, hear the same interviews, go to the same conferences, use the same software, have the same educational background, and so on. Groupthink results in groupproduct.

If you were to create a brand campaign for a social cause, and have it have real legs, how would you go about it?

A brand is nothing but how the audience feels about a product, idea, organization, public figure, etc. So it all begins with a way of framing the idea. I currently hold #blacklivesmatter as a great example of a simple, elegant brand expressed in a simple, elegant manner. No logo, no organization. Just a hashtag. And it’s changed the political discourse.

It’s also open enough where anyone can represent the brand. Patrisse Cullors, Opal Tometi, and Alicia Garza are the creators of blacklivesmatter.com, but if you do a search on the site for DeRay Mckesson, no results come up. Now Mckesson is probably the most visible person associated with #blacklivesmatter: appearing on The Colbert Report and other shows, and running for elected office …  But it was his active Twitter account and use of the hashtag that drew the attention.

When a brand can be owned and appropriated by its audience, and the audience expresses the brand’s essence with equal power and eloquence … That’s power.

Is there a particular brand campaign that you hate right now, and why?

There are so many worthy of being reviled. As data scientist Jeffrey Hammerbacher once famously said “The best minds of my generation are thinking about how to make people click ads.”

It’s easier to point out one that I admire: Tesla. Founder Elon Musk often states that the goals of his companies are to change the world and humanity for the better, by addressing global warming through the development and propagation of sustainable energy.

What’s next for Malcontent?

Recently I’ve been doing film titles. My first was for Sundance Film Festival darling Deborah Kampmeier and her current feature SPLit. Currently, I’m working on titles and on-screen graphics for a humorous short which we hope to be included in the next Sundance Festival.

I’m also working on a book with the intention of it being a Gesamtkunstwerk of my thoughts on design, visual culture and its role in society. It’s the hardest thing I’ve ever attempted, and it’s being done with neither a publisher lined up, nor a deadline. So there have been many starts and stops in the process. But everything I’ve written or presented in the past year and a half has been a series of public refinements of my thoughts.

There’s a painfully true line that no writer likes writing, but they do like having written. The past couple years have certainly given me a deeper respect for those who write for a living.