Going from graffiti artist to art director of an underground graffiti magazine to designing skateboard graphics, Martin Ander has had quite an envious journey as a designer, learning the ropes as he went along. 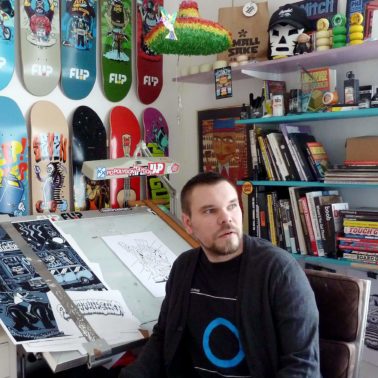 He was first introduced to the street art scene as a teenager, hanging with graffiti artists and trying his hand at it, even getting arrested at a time when Stockholm was enforcing its Zero Tolerance policy against graffiti. Fortunately, Ander met the right people at the right time, and he’s been a successful graphic designer for the past 17 years, still doing the kind of work that first inspired him as a teenager.

Tell us about your early days as a graffiti artist in Stockholm.

I can’t say I started as a graffiti artist, I was into art, comics and illustration way before that. But in the mid ’80s graffiti hit Sweden hard and I was blown away by it. I remember buying the book Subway Art at the Stockholm Art Fair in 1987, thinking I need to do this. I was super interested in graffiti, sketching, searching for pieces, memorizing the tags I saw on the subway, collecting Danish graffiti stickers, and reading everything I could find about graffiti. But I didn’t get a chance to actually participate in the culture until around 1991, when I changed schools and met some people who knew some people. Then I went all in, but it didn’t take long for me to understand that I was never going to be a hard core train writer or bomber, so I stuck to just being in the culture, sketching, painting walls, partying, and hanging out with other writers. And yes, I’ve been arrested a couple of times, but that was a long time ago.

What is UP and how did you transition from graffiti artist to art director of it?

Around the same time, I met writer Jacob Kimvall. He collected graffiti photos and exchanged them with other writers around the world. He and some friends were working on a Swedish graffiti magazine. A month later the first issue of Underground Productions came out—about 300 copies were distributed around the world. Underground Productions grew fast and soon became a voice to reckon with, not only in the graffiti world, but also in the debate on Stockholm’s Zero Tolerance policy against graffiti. They also started publishing books and soon transitioned into a publishing and distribution company. I was always hanging out at their office, helping out where I could.

Ten years in, they asked if I wanted to become the art director of the magazine. We rebooted the magazine and shortened the name to UP. We did the magazine for another five years or so publishing photos, interviews, travel reports, articles, and art analysis. But when the internet and social media hit, we felt that there was no need for the magazine any longer. UP is now on a hiatus. The Zero Tolerance policy is dead. The UP crew now runs Dokument Press, where they publish all kinds of cool art books and distribute subcultural media all over the world. They do lectures and workshops and they still have a voice in the graffiti and free speech debate.

What is the graffiti scene like in Stockholm and around the world? Is it growing, is it still considered underground or more mainstream?

When I became involved in the Stockholm scene, graffiti was underground. The Zero Tolerance policy really tried hard to stop the graffiti movement, by shutting down legal places to paint, graffiti events and even halting graffiti shows at public galleries. There was no internet, no Banksys, no spray paint manufacturers specializing in graffiti paint, no graffiti shops, hardly any graffiti outside of the western world, and no one had ever heard of the term “street art.” Nobody had any interest in what the writers and bombers were doing.

So yeah, it has definitely grown, and become accepted by the mainstream. But the scene is now many scenes. Everybody is doing it now. Graffiti writers and street artists are superstars. But there are still kids stealing paint, sneaking into yards to paint trains. But now they are doing it everywhere—Asia, Eastern Europe, South America, Russia.

It’s worldwide, and it’s underground and mainstream at the same time.

You also design Skateboard graphics, tell us a little about that.

In the late ’80s, I was into the skate culture and I really wanted to do skate graphics, but that was totally unachievable back then. I stuck to drawing graphic ideas in my sketchbook and designing posters and flyers for the local skate shop. Twenty years later some of my old skate friends started their own skate brands and needed graphics. So I started working for them. The word caught on, and I started doing graphics for other Euro brands which eventually landed me the position as the graphics guy for Flip Skateboards out of Huntington Beach, Calif., which is one of the top brands in the world. I do about 30 graphics a year for Flip, and occasionally some for other brands.

How do you keep up with the latest trends in skateboard culture? Is it always evolving?

I follow all the riders, artist, companies and business people in social media. But skateboarding is so big now, there are so many different scenes, trends, styles and companies. The style of graphics is always evolving, but at the same time the trends go in cycles. The bigger companies usually have their thing, the smaller ones bring new ideas.

Many of the new designs we see today are quite similar to things we saw in the late ’80s/early ’90s. but packaged for a new audience.

I really try not to look too much at what the other people are doing. I just want to do cool looking graphics and hopefully people will like it.

Graffiti seems to be a male dominated field. Do you see more women participating?

Historically, even though graffiti has been, and still is, male dominated, female writers have always played a big role in the progress of graffiti. And some of the top names nowadays are female.

But unfortunately, even if graffiti is, or used to be, an underground movement, it’s still a reflection of the rest of society, which sucks.

You do a little bit of everything—posters, branding, pub design, album art, deck design … what’s the most rewarding to you? Do you have a favorite project?

I don’t know. Every project is fun in its own way, and I’m stoked every time I see my work in print. I think I get better all the time, so usually I’m most satisfied with my most recent job. I do my best work when I feel that the client understands what I do and what I put in to it. When they choose to work with me, it’s because that they want my ideas, not just my hand.

You have some Robert Crumb stylistic tendencies. Are you a fan of his?

Yeah, Crumb is an amazing artist, I love his style of drawing and technique, and I’m sure that without Crumb my work would look very different. But, I was never into his subject matter, even though I loved the Terry Zwigoff documentary on him. I probably like that film more then I like Crumb himself, if that makes any sense. I don’t consider him one of my biggest influences. Out of the Zap Comics gang I was always more into Rick Griffin.