Brian Singer
Not Just Any Guy, but Some Guy

Brian Singer has been employed by some of the most progressive design thinking companies in modern times including Apple, Facebook, and Pinterest. Most designers would cut off their right arm to work for these companies, but Singer—although grateful for the experience—walked away from his most recent gig at Pinterest to pursue personal projects. 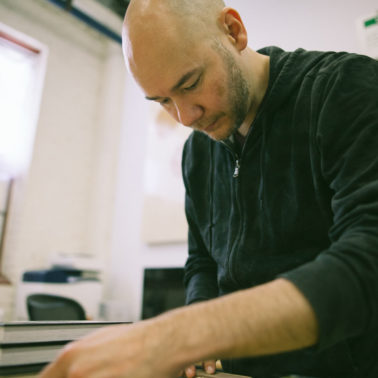 Singer, aka someguy, has become widely lauded for his pet projects which have netted national publicity, not only in the design community, but among mainstream media outlets such as The New York Times, the Today Show, CBS News, Huffington Post, and more. From inviting strangers to collaborate and share their sentiments in a blank journal and pass it on for the 1000 Journals Project, to exposing people who are driving and texting by placing their photos on billboards, to his #pileoftrump campaign, Singer has created controversy and discussion about what is and isn’t tolerable—or with the case of texting and driving—what is safe. (bio photo: Skyler Vander Molen.)

His main goal with most of his projects is to connect with strangers and to have strangers connecting with each other. Here, we ask him about his experiences, his personal projects, and what’s next.

You’ve worked for some high profile, design-driven companies. What’s the biggest takeaway from those experiences?

Every company (design driven or not) has real, challenging, business problems to solve. And no matter the company, I think it’s safe to say that design isn’t easy. Probably the biggest takeaway is that while design skill is important, it’s not the only thing needed to succeed and have an impact. You need strategic thinking skills, empathy, holistic problem-solving, leadership, great communication, the ability to hire and motivate talent, and of course, you can’t be an asshole. You know, all the things they don’t teach in design school.

You recently left Pinterest to pursue your side projects full time. Are you crazy? Why?

Yes to the first question. As to the second … see the first. Pinterest was probably the best job I’ve ever had, and I’m really lucky and appreciative to have worked there. Over the last decade though, I’ve spent more and more time focused on art and side projects. About a year and a half ago, I got a studio to work in. I began spending my evenings and weekends there, and eventually realized that’s where I wanted to be all the time. It comes down to the choices we make with how we spend our time and money. I say this now, but check back in with me in a year because who knows, maybe I’ll be off on some other tangential pursuit.

You do a lot of pop-up/controversial projects …. How do you make a living doing this?

Uh, I don’t. The same way all the best tasting foods are bad for you, there’s no money to be made with what I do. I have fantasies of finding a patron, or financial support for my endeavors, but until then, I’m just going to keep doing things I believe in.

Everything is a trade-off, and most of my ideas don’t have commercial value.

So, if you don’t make money with these projects, how are you going to keep the lights on?

Seems like that would require a plan, which I don’t have. I’ve saved up for long enough to give me some time to figure it out, but other than that, who knows? I tend to be a planner, and very methodic in my decision making. It feels good to jump without looking. Scary, but good. I know I can always get work to pay the bills, but for now, that’s not a priority.

What project has brought you the most joy/fulfillment and why?

This was the last question I chose to answer, which means it was the most difficult. Not because it’s too hard to pick, but I think it’s because I don’t necessarily associate personal joy/fulfillment with many of my projects. Not sure why, but that’s probably for a therapist to figure out. I’d say that the project that was the most fulfilling was the journal project with UCSF Benioff Children’s Hospital. Seeing the journals have a real and positive impact on kids dealing with such difficult and scary situations melted my heart. It was an emotional roller coaster. At the same time, it’s one of those things where I feel a bit of guilt for not doing more. I tried to get more journals projects to happen at more hospitals. It worked for a few, but not many. The hill was too high to climb, and eventually I let it fall to the wayside.

How do you get the funding to do a project like TWIT Spotting? Did you pay for all the billboard ads yourself? Did any of those people come after you for exposing them for texting while driving?

Going corporate opened my eyes to a few things. One of them was bonuses. When that time of year came around, I’d overhear people taking about what they were going to do with their bonus checks.. a trip, buy themselves something nice, etc.. Me, I bought billboards. That’s the funding. I paid for everything myself because I couldn’t find anyone else to pay for it.

I think the government spent $8 million on their distracted driving awareness campaign that year. In the end, my approach received more news coverage and caused more discussion on the issue.

I was hoping for someone like a phone maker, or car company, or insurance company to help me blow the project out and really make a dent in the problem, but no such luck. Can you imagine what I could have done with that $8M?

As for people coming after me, no. However, I did get plenty of angry comments/emails, and even a few death threats.

What is the most trouble you’ve ever gotten into for one of your projects?

I don’t think I’ve really gotten into trouble. I’ve had people get angry at me, lots of them, but no one’s ever come after me or anything. Maybe I’m not taking enough risks.

Do peoples’ behaviors still surprise you?

That’s a pretty wide open question. A lot of people I know are looking around, bewildered at the fact that Trump is a viable presidential candidate, given everything he’s said and done. And it made me surprised that people are surprised (oh, I’m surprised too). But it sort of goes to show that we all surround ourselves with like-minded people, and live in our little bubbles, and are then surprised when millions of people think a different way. We’d probably all be a lot better off if everyone in the country was picked up, shuffled, and dropped randomly into a new community. It’d suck for a while, but in the long run, it might be the only way to save us.

And… that didn’t really answer your question. Yes, people’s behaviors surprise me. All the time. It’s mind-boggling. But, it probably shouldn’t be.

Has there been a project you’ve wanted to do, but thought it might be too risky, or does that not even enter your mind?

Well, I’ve had no problem cutting up the Bible, but have clearly stayed away from certain other religious texts. So there’s that. I’d like to do more public art, but have hesitated due to the legality of it (and none of my projects are going to get a grant or be approved by a committee somewhere). All in all though, most of my projects are limited by resources, not risk.

What is the one piece of advice you’d give to a young designer?

Reassess who your heroes are.

What are you working on now?

I’ve always got like eight projects in motion. I’m working on a series of pieces around assassinations (so, JFK, Malcolm X, John Lennon, etc.) and the guns used to kill them. These are all using books about said political figure, and a process which is kind of hard to explain, involves cutting up the books and assembling the image of the gun using the edges of the paper. I’ve also been cutting up books with red/green edges, and sorting that paper into gradations. They’re really quite beautiful. And, I’ve been dropping books around San Francisco, in the hopes people pick them up and read them (and contact me). It’s a novel way to connect people, I think.

JJ Sedelmaier has been the co-creator and producer of some of the funniest animated...

Marc English: is Always Going Off the Beaten Path

Whether he’s teaching, designing, or hitting the road on his motorcycle, Marc English never...

Powerful, elegant, diligent, and smart. These are words that describe Jennifer Morla to a...