Walking the line between graphic designer and fine artist is tricky. Developing graphic communications for clients versus creating highly personal projects are at opposite ends of the spectrum in many ways, but Paula Scher has managed to master both, and she says for her, one informs the other. 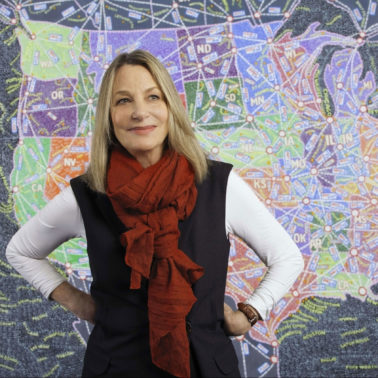 In both careers, her love of lettering is evident. Her typographic renderings have become part of the design lexicon in the past four decades, most notably her work for the Public Theater. Scher’s largest scale typography project to date just wrapped this summer with the mile-long rendering on the restored boardwalk at Rockaway Beach, which is in stark contrast to the highly detailed, intricate lettering found in her map paintings.

Here, we talk about some of her early projects and the impact the designs had at the time—and their relevance now—the changing roles of designers and clients, and her second career as a painter.

You were one of many designers asked to produce campaign buttons for Hillary Clinton. Do you think design can move a campaign one way or the other? 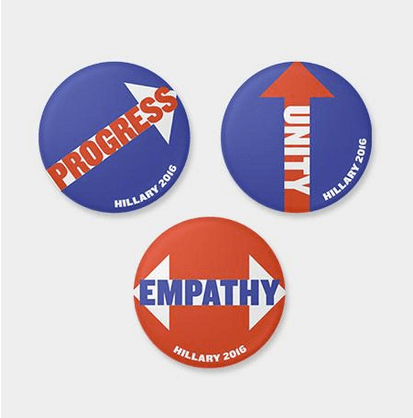 What do you think is the biggest challenge for designers just getting started?

I’ve been teaching a senior portfolio class for many years. I see students who are incredibly professional and very facile, and what they can’t possibly know out of school is how ordinary people and clients perceive what they’re doing.

The biggest shock for them is getting in a client situation and realizing that their job is to teach that client how to see.

And they have to understand what the client sees before they can actually show them how to see in a different way.

I like to teach because I have to look at students’ work and figure out how they can make it better and it’s still their work—I want them to look at it through another set of eyes. I end up learning more than they do.

In your book, Make It Bigger (published in 2005), you said you had a revelation when working on the brand development for Oola candy, where you basically did everything for them. You said, “I decided then and there that from that time on marketing departments should work for me, not the other way around.” Has that happened and do you still feel that way?

[laugh] Oh yeah. I think that there is the study of an industry that a marketing department can impart. But I think I am the marketing dept. In other words, I’m not a media buyer. I haven’t done the demographic work that’s usually handed to me. My specialty is being able to create something that other people come to recognize and understand as a specific thing. It can be a place, it can be a product, it can be anything.

As a designer, our understanding of that place or thing is forever woven into that design.

I can make things understandable and recognizable to audiences. That’s one function of marketing, and when that function needs to be performed, I think the marketing department needs to work for me.

What’s your feeling on focus groups? Do you think they’re effective?

It depends on the questions, it depends on the products and it depends on the situation.
I’ll tell you one thing that stays with me all the time: From 1974 to 1982, I made about 150 record covers a year, and they weren’t focus tested. They would only get through a company with approval from the band. The records were totally global, and they seem to have done just fine—and most of them are still in the marketplace. 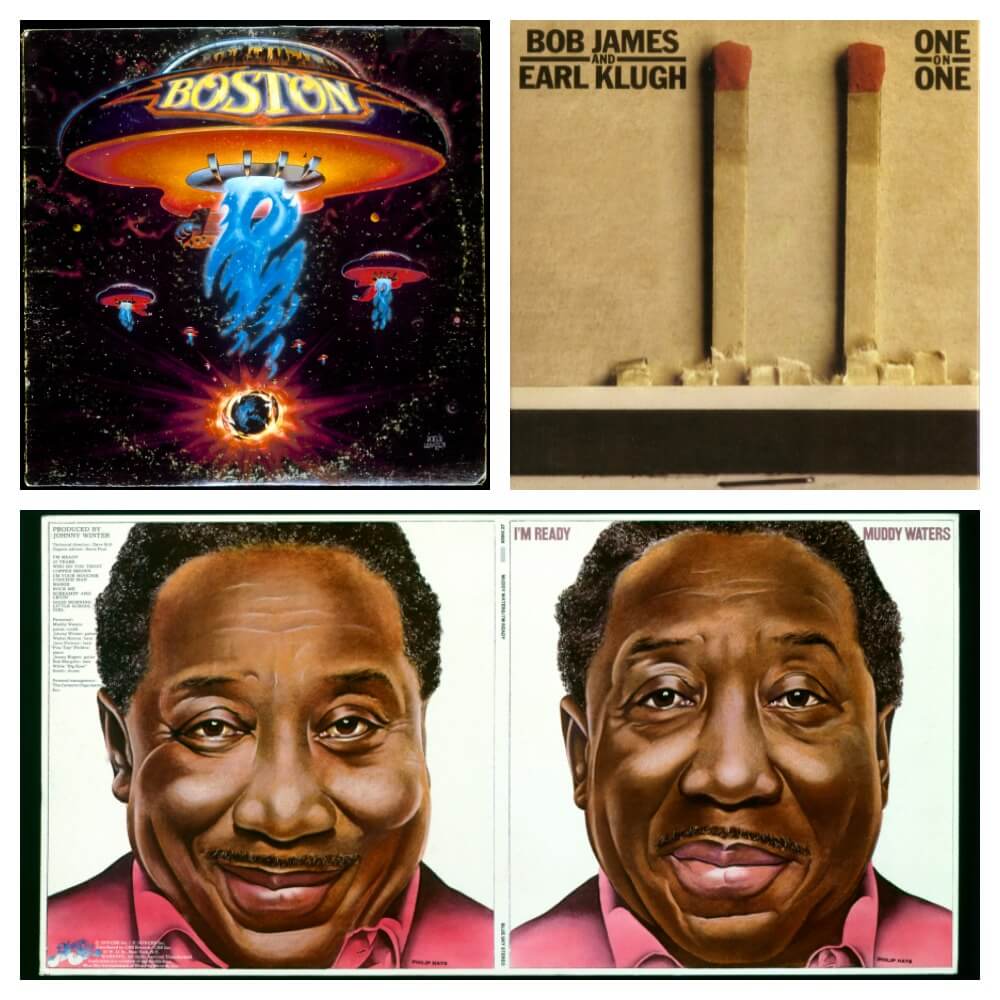 Which brings up the Boston cover you designed in 1976 …

It was very complicated for a silly thing. It went out the door and sold seven million copies and I never understood it. I never understood the hit song, “More Than a Feeling,” and I don’t understand it to this day. I wasn’t 16, I was 27. If I had the mind of a 16 year old, I would have known why it was so terrific. People still tell me this now, and they think I’m a snob because I didn’t know how good it was. But the fact of the matter is, sometimes you just hit a zeitgeist. It’s so iconic that only last year, Peter Ziegler on Wait Wait … Don’t tell Me!, used it as an analogy in one of his jokes. And I thought, oh my god, he’s talking about a record cover that came out in 1976. That’s longer than most corporate identities live. 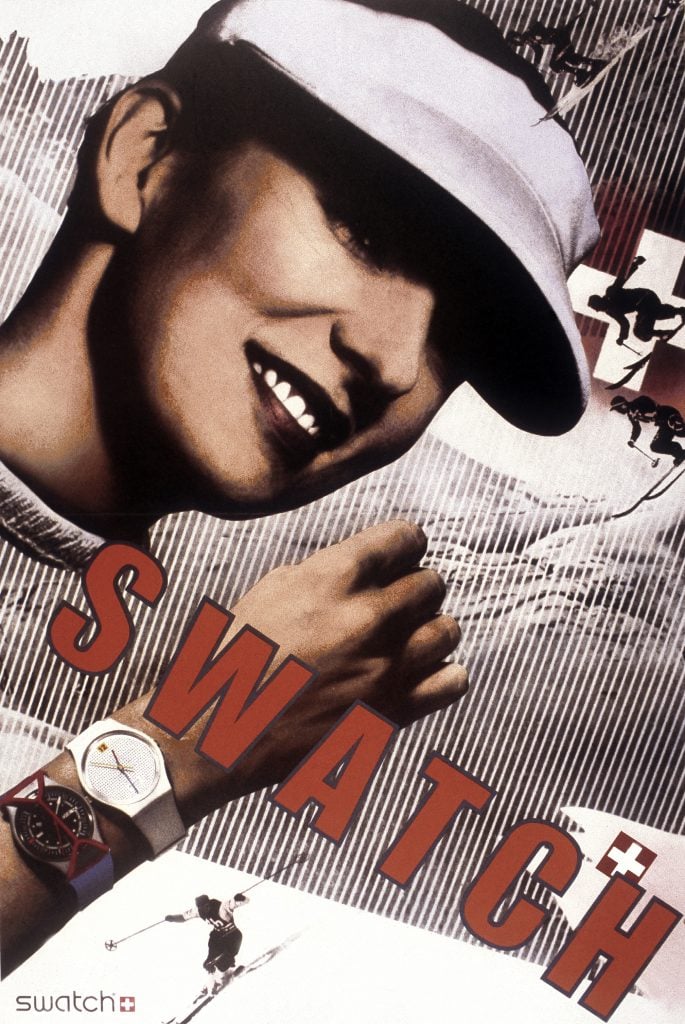 In the ’80s you were criticized for your Swatch poster parody—either people didn’t get it or they thought you were plagiarizing Herbert Matter. You and Steven Heller also did the parody issue of Print magazine around the same time. Do you think these things would still resonate today?

I think parody is a less understood form. I grew up in a generation where the Beatles parodied other forms of music. Or the idea of using famous art in some form—like using the classic American painting that Grant Wood did for advertising in the ’60s to sell Corn Flakes. It was called American Gothic.

There were things like that, that existed all the time that were part of our vernacular, and it’s disappeared.

Everything is available at once now, so there’s no history because it’s all present and past at the same time on Google. It’s all mixed up. You don’t have a sense of it—there’s no place. You don’t know if it’s a joke or if it’s a mistake.

Do you think clients are more or less willing to take risks when it comes to their brands in recent years?

What I see that’s changed is that the understanding of what design is, has really increased. Clients are much better educated and more sophisticated than they used to be. I find it easier to have discussions about design than I used to, because their knowledge is greater. Mostly when they hire me they already know all about me. I’m spending very little time explaining who I am and what I do and much more time getting to talk about them, which I appreciate.

I feel that it’s a terrific time for design. I think the opportunities are huge. There are so many areas to work in. 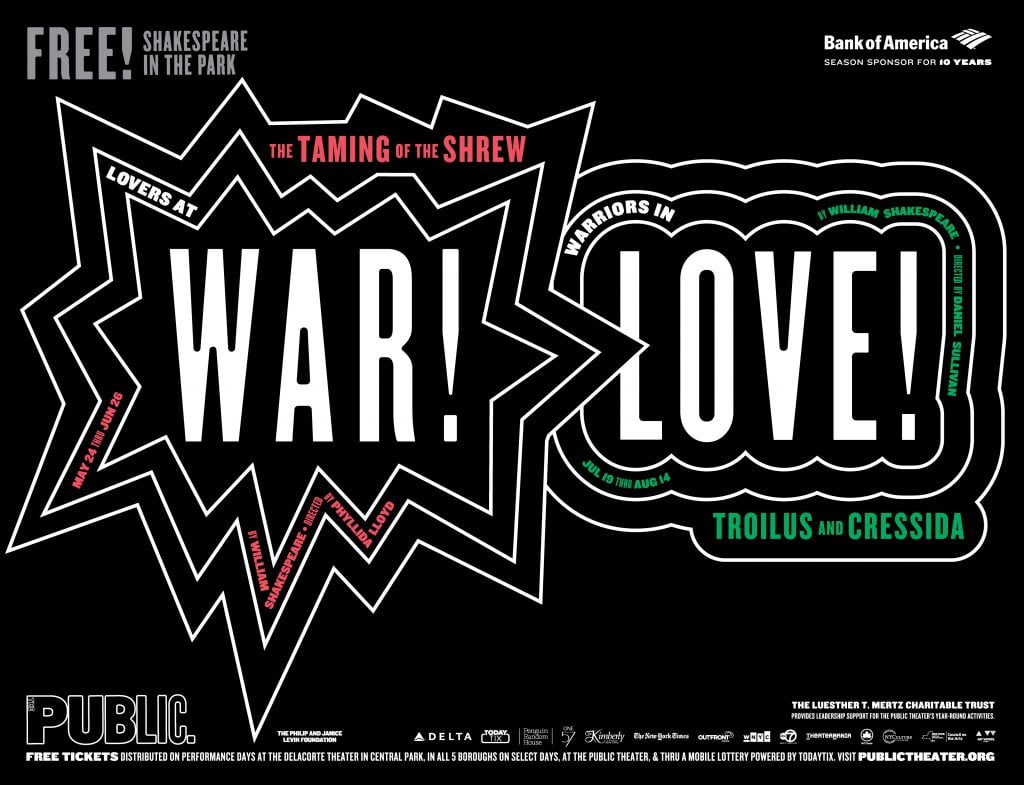 Do you find that you still have to defend your work to clients, or is there more trust given your experience?

I actually feel that I’m not “defending.” We’re having a dialogue, and sometimes I’m educating and sometimes I’m being educated. There’s much more give and take. I keep my clients for a really long time. I’ve been working on The Public Theater’s graphics for 23 years and The High Line for 16 years. Things just stay. They don’t go away, and I love that. I think it’s wonderful.

I have a wonderful relationship with [New York City Restaurateur ] Danny Meyers. If he gets on the board of something, he recommends me. It’s really great. That was not the case before. 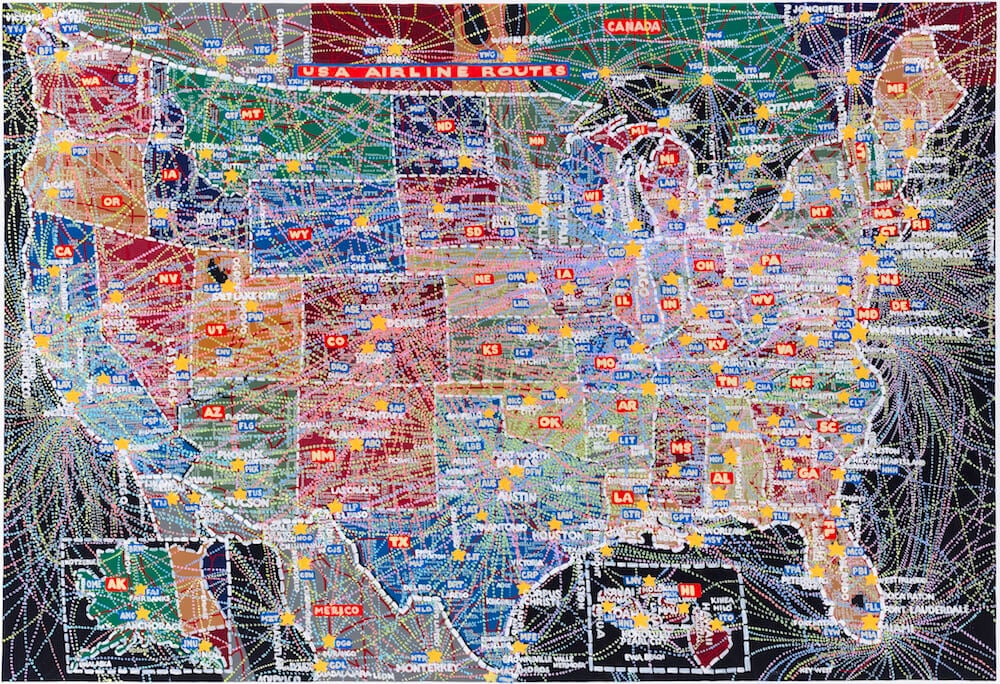 How did you get started with the map paintings and how much time do you spend on these?

I was doing these very small intricate, sort of satirical paintings back in the ’80s. The first one was on the back of an AIGA cover. I painted a map of the United States from memory and accidentally left off Utah, so I drew it in with a dotted line, after the fact. 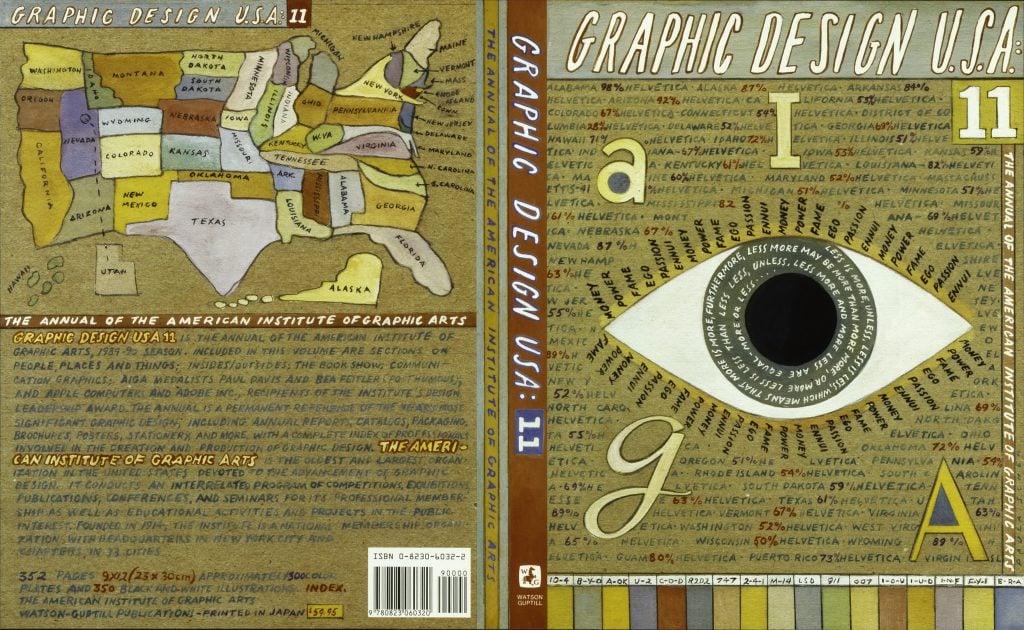 Around 2000, I thought it would be terrific to paint these at a large scale. And then they stopped being satirical and they became more a form of information art. I began to create them, and my friend had a gallery and his gallery started showing my maps. So it became a more professional form of being a fine artist with gallery representation, and shows and everything. I never intended that to happen. I was mostly finding another way to work to sort of practice and loosen my creative juices.

Now I really have two careers: I’m a graphic designer and I’m a painter, and they’re not the same role. 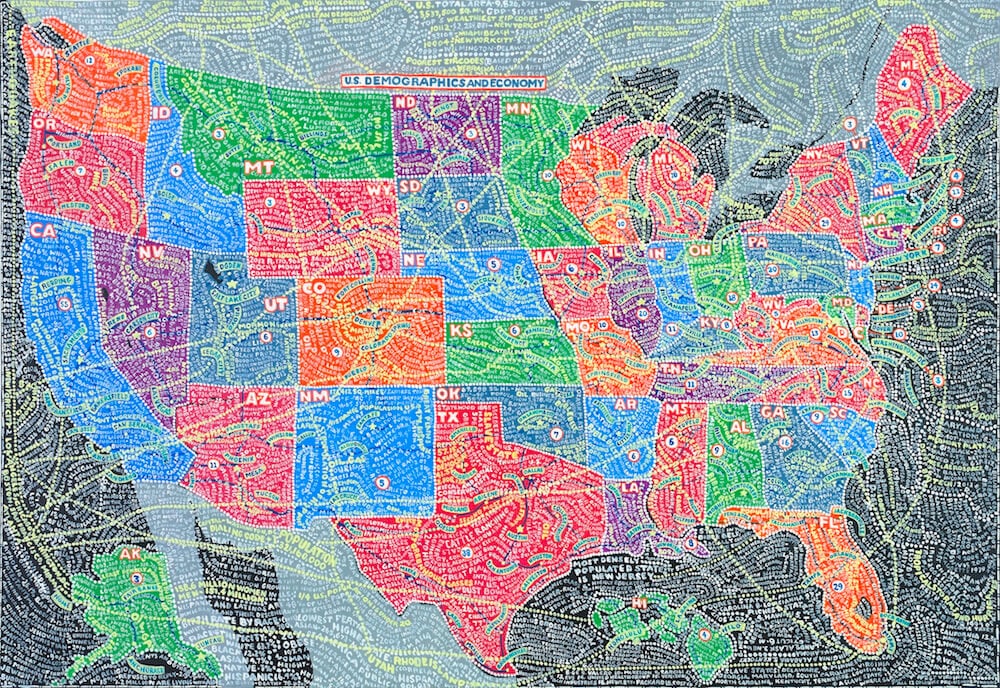 Sometimes one overtakes the other, but I’m mostly managing it. I work in the city four days a week and in the country three days a week. I’m mostly painting over the long weekend.

It’s a lot, but I find when I have the balance right they inform each other in a positive way. And I think it’s good for a designer to be able to change the speed at which they work, or the way in which they think.

John Fluevog has been crafting high quality, funky shoes for more than 46 years,...