Roger Black has been a trailblazer in publication design for five decades working for magazines like Esquire, Rolling Stone, Fast Co., Newsweek, Advertising Age, and many, many more. He also led the digital revolution in the mid ’80s, when Macintosh computers were first taking off and PageMaker and QuarkXPress were the only layout programs available. 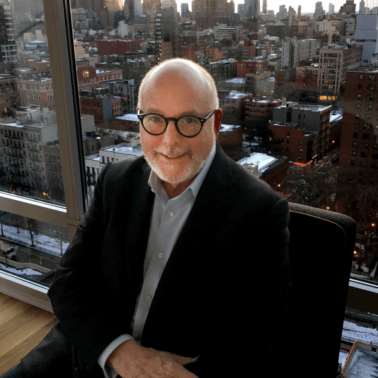 He’s still at it, consulting for publications around the world, as well as working with Type Network, a distributor of Font Bureau fonts, among others. Still obsessed with type and the written word, he’s not interested in retiring. In his mind, there are endless opportunities to be had with print and digital publishing and typography.

Recently, Black moderated and directed the Poynter Institute’s Digital Design Challenge, by engaging some of the best designers to see if they could come up with solutions to attract and attain new readers to online media outlets. In a world, where everything is a click away, is it even possible?

What are the biggest factors in recent years that have changed consumers’ reading habits of online and print publications?

At the very top, we see newspapers and news publications digitally doing quite well—digitally. The New York Times seems to be surviving well. In the regional markets, it’s much harder. The Chicago Tribune and The Los Angeles Times are struggling. A number of things happened to make this difficult. You know, life changes, the world changes, the innovation of the internet changed a lot of things.

I think newspaper publishers made a major mistake in the late ’90s, at the beginning of the commercial web, when they decided that their business model should be coming from advertisers rather than subscribers.

We also have social media dismembering the way people spend time with news publications. That would include newspapers and news magazines like Time or the Economist. We used to sit back flip through every page of a publication—because we paid for it. That flipping took us past a lot of advertising. Publishers could say to advertisers, ‘You know, not everybody reads the stock listings, but they tend to take a look just because they want to get their value out of the paper, and we have the numbers to prove it.’

We got to the point where we’re reading newspapers from links, and we’re not paging through and seeing all the ads. You’re not even necessarily aware of what publication you’re looking at. You get a link from a friend and you go there. The pages look quite a lot alike. This led to the fairly rapid growth last year of fake news, where people found they could spoof the look of a news site easily enough to fool people.

In response to this, you moderated and directed the Poynter Digital Design Challenge in which five designers were tasked with coming up with design solutions for digital publications to engage readers. Tell me about this.

The challenge was, “Can better design create a user experience that engages readers and drives revenue?” First, I found five pundits who would set up the problem or the brief, and one of them is Mario Garcia, who’s a well-known publication designer. So, last October, we had a two-day conference at the Columbia Journalism School in New York, where the pundits set up the idea and presented the challenge to five designers who would then be tasked with coming up with their own solutions.

Megan Chan from The Washington Post pushed us to reach all the platforms—web, app, video, social, everything. She gave some good management tips on working with teams, and she pushed for combining the design and business models. Unless you do, Megan said, you will not succeed.

Susan Mango Curtis, an educator at Medill School of Journalism at Northwestern University who had spent many years in the trenches as a newspaper designer, talked about the approaches young journalists are considering, in particular, VR, AI, and gestural design. She challenged the project participants to “design the experience.” John Temple, who’s now at Berkeley, gave a slightly, sardonic twist on the subject. He was a little more realistic and sharp than some of the others.

And Chrys Wu, who’s sort of a guru of news web ideas or digital news ideas at The New York Times, and is in that interesting space—she’s managing the relationship between journalism, design, and coding. She said that the news business has always been about grabbing attention—which is a good point—and she talked brilliantly, about advertising as “the soft science of want.” She said news had to have a voice, literally—like Alexa! And she pushed the designers to work out how design can build trust.

Taking this information, the designers then went to work on their solutions, which they presented at the Poynter Institute on Jan. 27. Please provide a synopsis of their ideas.

Kat Downs Mulder, graphics director at The Washington Post, redesigned the paper, showing how the site could adapt to the reader, particularly the occasional reader—the person who is parachuting in from a social link. The site would get to know what they’ve read and what they’re interested in, and still create a kind of newspaper edition for things they’re interested in reading. It doesn’t look dated, it looks fresh, but also something that you can get through. “Completable” is one of Kat’s words. I mean, it’s fantastic that she has the confidence to present such a challenging redesign publicly! 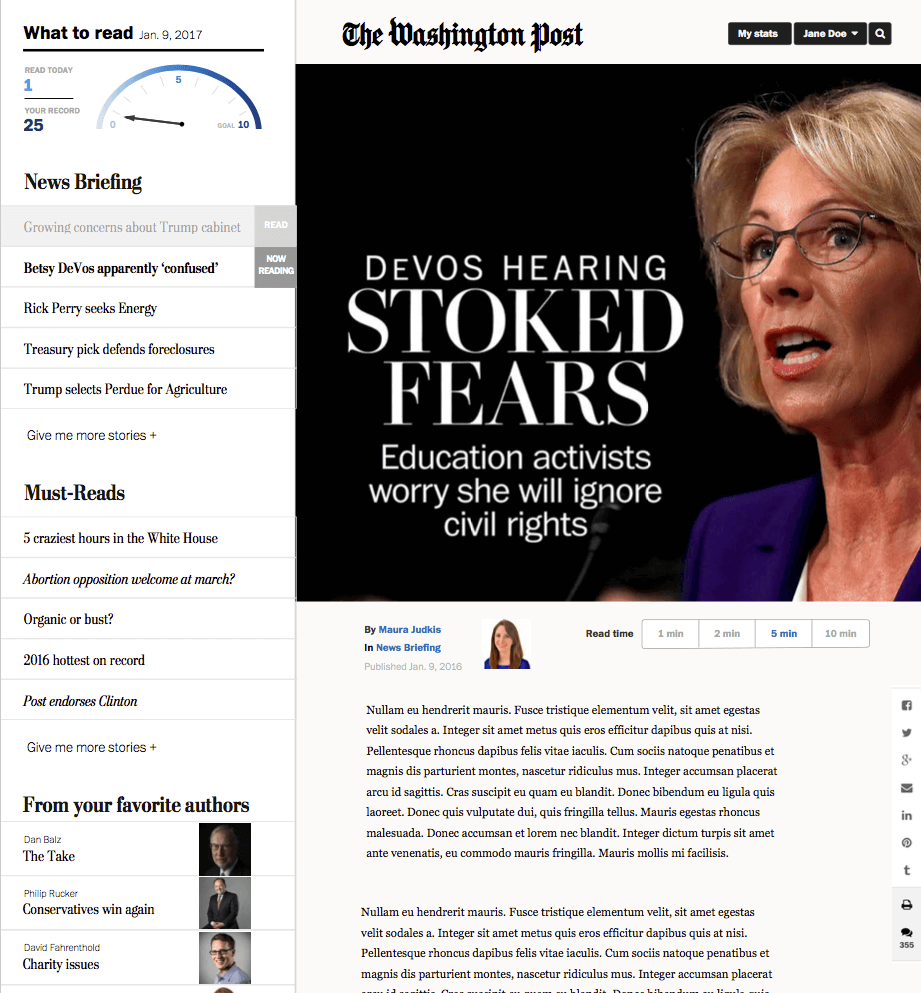 Mike Swartz, whose studio Upstatement, based in Boston has done a lot of this work. He went back to his hometown, Pittsburgh, and did an “uninvited” redesign of the Pittsburgh Post-Dispatch. He actually talked to those folks, and two of the top designers from Pittsburgh were at our first conference in New York, and then they came to the final presentation to see what he did. He didn’t just do the design; he showed how to stage the brand in the city—for example, opening a swag store where you have branded baseball hats and that kind of stuff. He talked about how to get involved, be part of the community. It’s an utterly wonderful effort, and a complete guidebook will be published on the Challenge site. 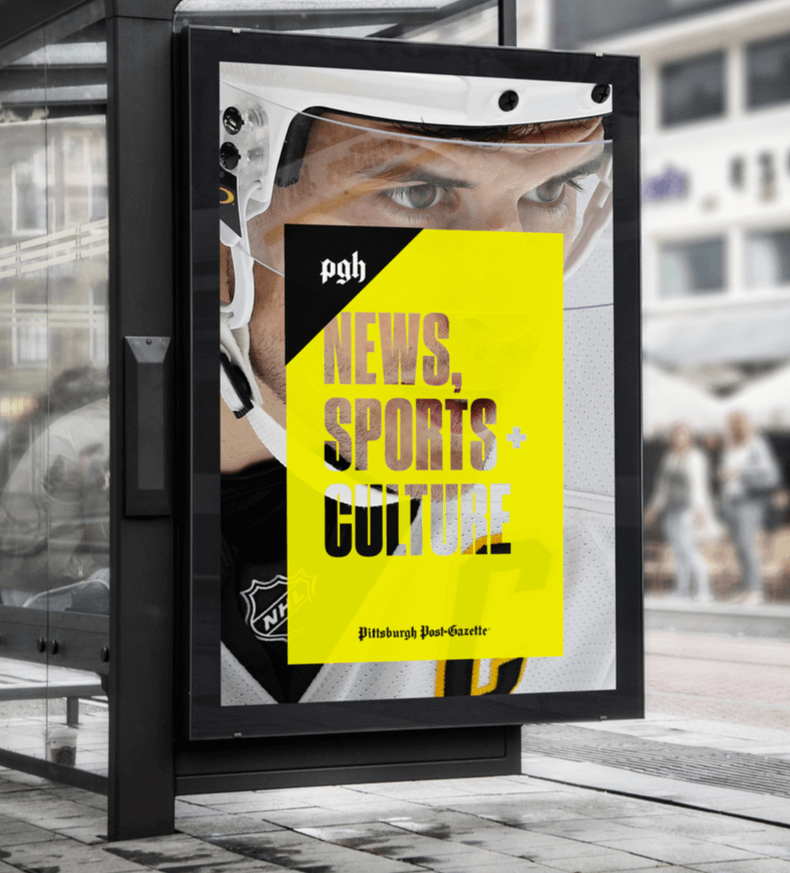 Then Jeffrey Zeldman kind of surprised me. I imagined he’d do this big picture architectural view, because he’s such a big thinker. Instead, he went to a granular focus on the questions: What’s a news page? How do you get people to read a news page? He did it with typography, and he layered the typography a little bit like nineteenth-century newspapers, with multiple decks, and headlines, a big text intro for the first paragraph, and sometimes they would interrupt it with other, big chapter titles or breakers, big captions. He did a couple of different dresses of it, chose interesting fonts, and he did this in CSS and is publishing it all. It’s all open source, it’s going to be a GitHub resource that you can go to. You can take it and use it exactly the way it is or adapt it, or re-skid it, whatever you want. 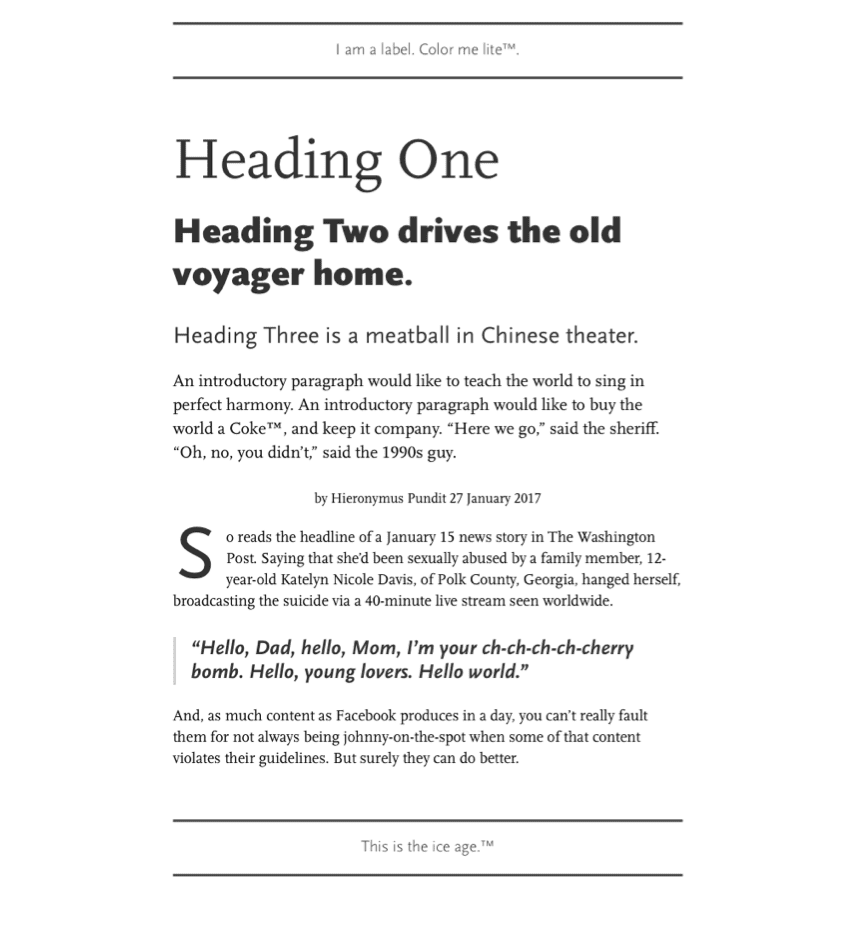 Zeldman later wrote about his solution:

The easiest, fastest, most readily attainable path to clean, uncluttered, authoritative, branded design is through typography. 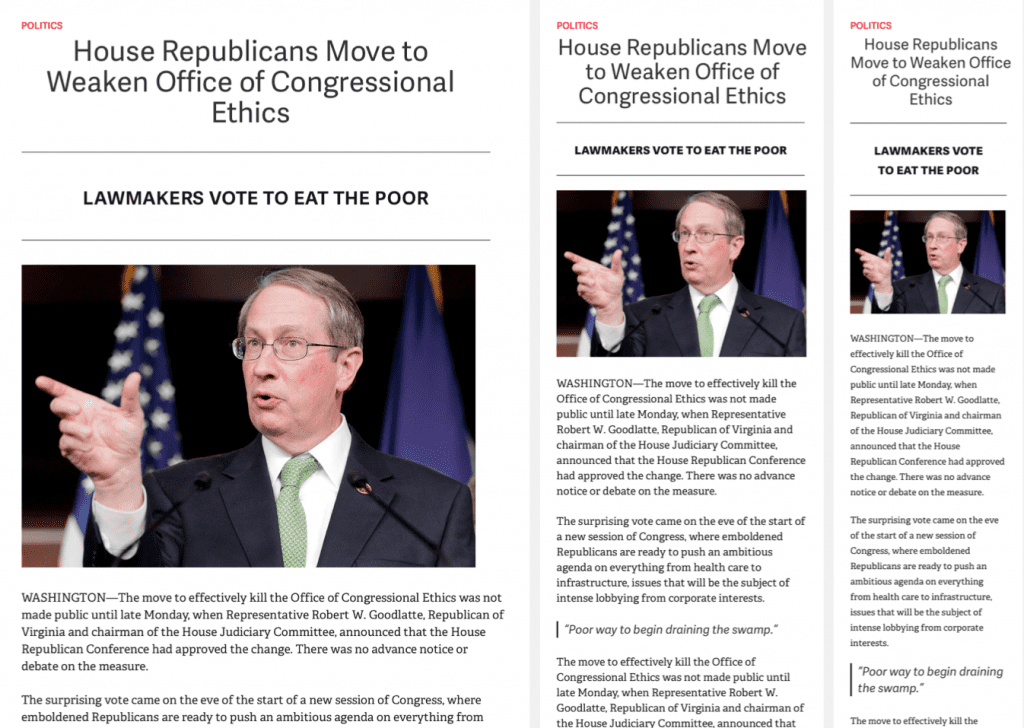 Of course, the good thing about Git is that if you do something, you’re supposed to post it back. If you start with open source, you keep it open source. You turn it back to the community and they can see what you’ve done, what code you’ve added, what design you’ve added. The whole idea of this project is to put it all out there for anyone to use, however they want, and use it as a challenge to do something better. To not be so damned serious about it. Don’t think of it as strategy; think of it as tactics. I like that.
Lucie Lacava did kind of the opposite of Kat. Instead of involving a big server-side, machine-learning AI effort, she asked: What if we just had some simple, but deep personalization? She showed a series of menus that people go through and hit radio buttons to select what they like in terms of news categories, and how they want the page to look in terms of colors and type and layout. Her idea was that if people are willing to go through that, then you know something about them already.

That’s a form of subscription, and that’s very valuable, because you have a committed reader who’s interacting. Once you interact with a site, it’s much more yours than before.

Everybody has been talking about VR and having more videos. Jared Cocken found a great source for video with templates and very easy production techniques, at very low cost. He had one of the developers from Berlin actually show up to present it. Then he did a big VR presentation—awesome, low-cost VR. The New York Times and many others have spent a lot of money trying to make VR, and it is very immersive and wonderful, but there needs to be an easier technical solution for doing this, and that’s what Jared has come up with. (As of this writing, his presentation isn’t available for viewing.)

These designers showed doable solutions to create better news design. It’s pretty wonderful, but it won’t really be a success unless people pick it up and run with it.

What are the big take-aways from this experiment?

The first is to make the top of the news simpler with better-designed pages. It needs to be good-looking, and readable. Then there has to be some kind of indication that there’s more in the publication than just that page, some way of sending people to the next story instead of sending them off your site. If you have promos, do related stories that keep readers on your site.

We have to get rid of the extraneous, crappy ads. We’ve got to calm that down. I mean, if we’re not making money from that, all we’re doing is pushing people away.

All the presentations can be seen here.

Steven Heller: “Am I Still Relevant?”

As the most prolific person in graphic design ever, Steven Heller is questioning his...