When most of us watch movies, we don’t even think about the miscellaneous props in the scene such as paintings or photos on walls, furniture, dishes, papers, etc., unless something looks out of place. It takes a lot of effort to achieve this invisibility, and Ross MacDonald is one of the best in the business. 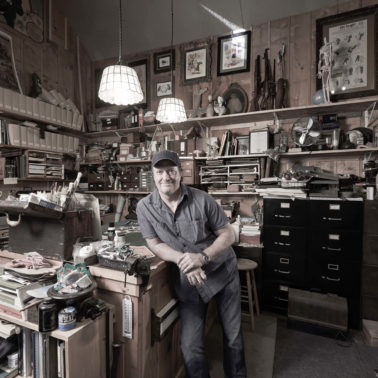 His props have graced such productions as The Hateful Eight, Joy, Boardwalk Empire, John Wick, Saturday Night Live, Parks and Recreation, and more. He spends hours and hours on research to make sure every detail fits with the aesthetics of the time period for which the movie is based. MacDonald will tell you that most props aren’t sexy. Oftentimes, they consist of paperwork and forms, but they need to look legit in order for the scene to be believable.

He hasn’t always been a prop designer, and it only accounts for about half of his business. He’s an illustrator, designer, and printmaker with his own letterpress studio, Brightwork Press. His propmaking career started by chance, over a cocktail. MacDonald met a guy at a party in 1993, who was working on the John Hughes film, Baby’s Day Out. He said they needed a faux 1930s, illustrated childrens’ book for the movie. MacDonald ended up getting that gig, working on set in Chicago for six months. He’s been making props ever since.
He talks us through the nuances of this niche area of design, and shares insights on specific props he created for Joy, Boardwalk Empire, and Hateful Eight.

Describe what you do?

The type of props I usually work on are what’s called “graphics props,” which can mean anything from signage, letters, menus, documents, newspapers and magazines, books, maps, tattoos, passports, diplomas, posters, etc. One of the strengths I bring to this work, is the fact that I have extensive experience in print. I’ve been a printer, an author, a designer, and an illustrator. I’ve worked on real books, magazines, newspapers, record covers, signage, animation, comic books, children’s books. So when something like that comes up in a movie or TV show, I know what needs to be done. How do you budget for these projects? I mean, all the research that goes into these period props must take hours and hours.

It’s a balance. If I billed for all the hours and hours of research it took to make some really simple FBI form, for example, the unit production person will say this is a one page FBI form and he’s charging us thousands of dollars. You can’t bill all the time for that one prop, so you try to even it out. You hope that down the line the research isn’t wasted because you can use it for other shows. When somebody asks for something really detailed like passports, military records, or police forms, I know where to go. I have this back log of knowledge and files that I can put my finger on right away; I don’t have to dig around looking for things.

Here’s a prop I found particularly fun and interesting to work on. We barely see it on screen, but we never know how much we’ll see of a prop until the episode’s final edit, so every prop is made with the assumption that it will be seen in a lingering close-up.

There’s a scene where two of the show’s characters are at a Cuban cafe. A boy comes along selling lottery tickets, and they consult a “Dream Book” to help choose a lottery number. When they first started working on this episode, the prop-master Vinnie Mazzarella called me and asked me about how the Cuban lottery worked. I did some research and dug up a few things, including a Colliers Magazine article from May of 1931 by William G. Shepherd that described how the whole system worked. Dream Books are cheaply printed books of numbers that the superstitious use to help choose lottery numbers. The whole system was codified in Cuba, and copied elsewhere.

I created the entire dream book from scratch, with the exception of the image on the cover, which was taken from old Cuban La Charada China books. The numbered entries are all correct, although there are a lot of variations between actual dream books. I drew new illustrations for each item, 100 total, plus additional images for the opening pages. I didn’t copy any of my illustrations from any Charada books, but I did want them to have a 1930s look, as well as that crudely printed vibe. Quentin Tarantino has a very iconic prop that he uses in all his movies—Red Apple cigarettes. With Red Apple (as with most of the stuff for Hateful Eight), I was left on my own to figure out what to do. The prop-master, Don Miloyevich, and I had already agreed that we wanted to be as period correct on this show as we could, even though Tarantino is less concerned about that. So I did the usual broad overview research that I do with any period prop—I looked into how tobacco was sold in America around that time (roughly 1870), in what forms, what kind of packaging, etc. I went more indepth into the packaging aspect, since that was something that I had to deal with across a broad range of products for props and set dressing for this.

Using the image of Eve and the snake seemed appropriate for the cigarette package. The director wanted Red Apple to be loose tobacco. They specified tobacco pouches, but I made up the tins as well, since I liked how they looked, and we didn’t have tins for any of the other brands. That’s what they ended up using.

I have collected letterpress type for many years, and one of the things I delved deeply into was period typography and the history of typeface designs, so I have a pretty good sense of what typefaces are period correct and can hopefully avoid some of the typographic gaffes that you can sometimes see in movie props. Tarantino also requested “Indian” themed tobacco products for one of the characters, but didn’t give any more direction beyond that. Most of the props for this were created while filming was going on, so he was busy with that, and I had to create them quickly. Much as I would have loved to do the illustrations for the packages, there was no time, so I dug through my cache of hi-res scans of old cigar labels. Luckily, there was plenty of Indian imagery used on 19th century cigar labels. I hand lettered much of the type, and did the remainder digitally. I came up with three brand names, and did three different versions of the packaging so he had choices. Directors love choices.

We chose to do a bit of a period cheat with these—hand rolled cigarettes were available at that time, but were expensive. Cigarette rolling machines were developed slightly later than our time period, but the prop-master and I loved the saying “machine rolled cigarettes” and chose to use it anyway.

I knew that Tarantino wanted to have vague hints that some of the characters were not who they seemed, and having a rough-edged character smoke fancy machine-rolled cigarettes was the kind of thing he was looking for.

We hand-made the cigarette boxes—two were done in the clamshell style, and one was done in a simple flip-top style. I have lots of period cigarette packages, so I studied them for construction details, and based my packages on those. My assistant made dozens by hand, and also hand-rolled hundreds of cigarettes. Joy: How to Pick Up Women before the Internet

A large part of the job is consultation. For Joy, for instance, the prop guy is young and he wanted to know how single people met other singles before the internet, because there’s a scene in that movie where Robert DeNiro’s character is looking for love. The film is based in 1990, before internet dating services. There used to be a lot of free alt-news weeklies and free give away publications that were put out in boxes or racks in restaurants or on busy streets. So we decided to make up a magazine—the Long Island singles version of Auto Trader.

I got old samples to work from. The people who run an ad get a box number, so I made up this whole system. They wanted DeNiro’s character to exchange postcards and phone calls and eventually meet up, so I stapled postcards into the magazine. It was a lot of research for this one prop that we see on his desk. I made up all the pages and wrote the copy for the print ads.

The background and build up is the interesting part for me. Props aren’t supposed to be earth shattering.

What’s the strangest prop you’ve been asked to make?

Clutter family murderer Perry Smith’s journals and letters for Infamous was one prop that creeped me out. I also had to research and develop a handwriting style for a serial killer for the movie Mr. Brooks, which involved studying the handwriting of John Wayne Gacy, Ted Bundy, and other serial killers. I think one of the most difficult props were the photos I had to get for the last season of Boardwalk Empire. There’s a character called The Commodore, who is a pederast—he has sex with young girls. They wanted a way to quickly and wordlessly communicate that to a child character, by having her see a bunch of suggestive photos of young girls spread out on the Commodore’s desk. The scene took place in 1884. The writers and show runner had the photos that Charles Dodgson (aka Lewis Carroll) took of Alice Liddell, some of which look vaguely suggestive, and they wanted more, and more suggestive. Obviously this raises all kinds of issues— legal and moral. I showed them Victorian child photos by Julia Margaret Cameron and others, but they were deemed too tame.

I didn’t really want to start digging into the world of Victorian child pornography. After speaking to archivists and others, I decided the best way to proceed was to alter period semi-erotic photos of women, and de-age them. It was an incredibly fine line to tread, and one of those disturbing areas that this kind of work can lead you into.

Michael Winnick: On the Frontlines of Real-Time Research

People Nerd is a term Michael Winnick and his team at dscout coined to...

Tosh Hall has a problem with companies that try to redefine themselves every three...