Steven Heller
“Am I Still Relevant?”

As the most prolific person in graphic design ever, Steven Heller is questioning his own relevance. He just can’t stop writing about design, designers, design history, design criticism (in my estimation, about a book a month), so how can that be? 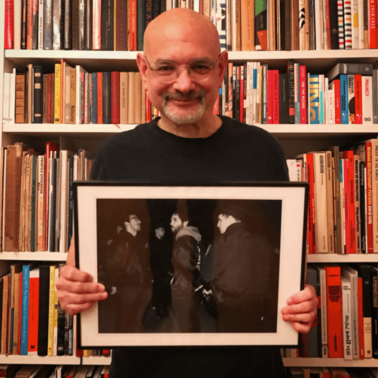 Heller has been the most vocal observer, critic, and champion in the design profession for the past four decades. As an art director at The New York Times for more than 33 years, he kick-started the careers of many well-known illustrators and designers. He’s written and/or contributed to more than 100 books on culture and design, and he just keeps writing. As the co-chair of the MFA Designer as Author Department at the School of Visual Arts, he’s influencing the next generation of designers and writers, but sometimes wonders if he’s losing his edge. Here we talk to him about the importance of being relevant and why it matters.

How did this idea of relevance come up?

One of the reasons I stay involved in the school and with the students is, you know the old cliché, “They teach me more than I teach them.” But the reality is that at a certain point there are people who maintain a certain level of relevance insofar as they can offer wisdom and experience. And I’m just at that point in my life where I’m wondering whether I have the wisdom and experience that is useful to anybody coming up in the ranks. For me, relevance is whether I have something to say that is more than just me thinking out loud.

I did a piece in Design Observer recently about the Pepsi ad featuring Kendall Jenner. One of the commenters took me to task, and said, “ … your opinion is no longer timely or relevant. Stick to writing about the past.” And, you know, it was nasty to say, but I responded, “The past is the present.”

But it may be that you’re just catching me at that critical moment, that stage of life we all go through. The terrible two’s, the horrible twenties, the midlife crisis, the sick sixties. I’m somewhere between the sixties and the seventies now. I know an awful lot of people who are in their eighties who, as far as I’m concerned, still have great relevance as artists, because I don’t think the art changes or disappears.

But I’m not an artist. I never was an artist, so I’ve pulled back from a lot of the things I was doing when I was truly more active, but still hoping that I can offer people something. And that becomes a conscious thing. Usually, it’s like breathing. You’re not really aware of your breathing until you start losing your breath.

Yeah, but what you teach and write about is design thinking and design criticism and history. Those things haven’t changed. That’s always going to be something that you’re known for and that you are an expert in.

Well, thank you for saying so. But there are moments–and they pile up–where the new history, the history that’s occurring now, which will be the history in the future, are going past me. Either because of the technology that I’m not involved with, or simply the cultural references that are being made. Seymour [Chwast] and I are thinking of doing one final volume of Graphic Style, in which we explore graphic styles through the ages.

You can talk about what happened 100 years ago and be pretty accurate about your descriptions, but as you get closer to the present it’s harder to make those generalizations and overviews. And I came up with an idea that I think would cover the current stylistic trends that could make a fourth edition, but it may just be that I’ve seen a few things that exist but really aren’t that important. And those are just things that I question a lot.

Well, in this case, the new section would be called, “The New Order.” And the new order has as much to do with politics as it does with vector work. There’s a kind of new order in design, a new precision that is brought about by an increasing number of digital tools. And I figured I could somehow come together and say, “That is the style of 2010 to 2020.” But I could be totally wrong, and as I research it, I could find that I was fooling myself.

There are many artists, who in a way, are more relevant in death than in life, or maybe just later in life.

I’ve just finished a book called “The Moderns,” which is about 62 designers who all worked in a kind of mid-century modern sensibility. We’ll see whether any of them become more appreciated now than they were. Maybe 75 percent of them have been kind of forgotten. You can read certain writers forever, and they’re always going to be relevant. Charles Dickens, Dostoevsky, even Norman Mailer retain their relevance. I don’t know whether you can say the same about graphic designers, which come out of an ephemeral world no matter what you say. You can appreciate them for what they did, and therefore they are in a pantheon. But whether they have a relevance at the moment that will cause other, younger people to do something different, that’s hard to say.

I guess I’m thinking of someone like Andy Warhol, who seems to still be popular and relevant.

Well, I think he retains his status in the hierarchy of twentieth-century art. But in the art world, relevance has very different meanings. Art is consumable. It has value, so if you’re somebody like Warhol, you’re in a marketplace. So it’s not just about inspiration. It’s about investment.

I know I’m not going to be of great interest to really young undergraduate students coming in who want to do gaming and animation, because I don’t know how to do any of that. But at a certain point, they’re going to want to have some critical perspective, and then maybe I can come in and be relevant to them.

So, is there an endgame for you as far as when you’ll retire from teaching?

No, there’s no endgame that I have in place. The endgame is going to come from somebody else. Somebody’s going to say, “Okay, he’s served his time and now he can go on parole.”

John Fluevog has been crafting high quality, funky shoes for more than 46 years,...

Josh Friedland, aka Ruth Bourdain: the Absurdities in Food Culture

In 2010, a new voice hit the Twitterverse, and had everyone guessing who it...