Michael Winnick
On the Frontlines of Real-Time Research

People Nerd is a term Michael Winnick and his team at dscout coined to describe people who really, really like people. As a designer turned researcher, he loves to get at the heart of how people tick to help his clients effectively market and sell their products and services. 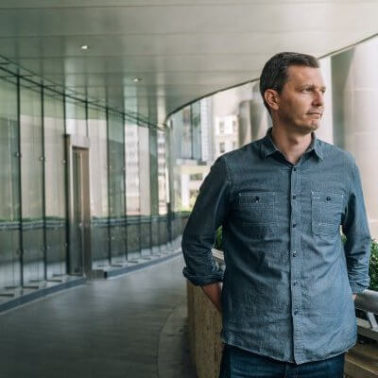 Winnick attended the Institute of Design in Chicago, which he says was “human centered, before human-centered design was a thing.” He wanted to learn how to make things that resonate with people, so he built the innovative consulting firm gravity tank, which takes a human-centered design approach to innovation. But as a strategist, he wanted to really understand users, so after nine years at gravitytank, he left and founded dscout to do research in real time.

Dscout currently has more than 100,000 scouts who record their thoughts and interactions in real-time using their smart phones, giving dscout clients instant and impactful information about their habits and how they use the products and services, as well as provide insights into what the next thing should be. Here we talk to Winnick about his research insights and how they help his clients, and how different research methods and polls could have been more accurate in predicting the 2016 presidential outcome.

What exactly is a People Nerd?

People Nerds are interested in understanding, and then telling, the stories of other people. I think broadly, in the world, we are trying to train everyone to become data nerds, so I think People Nerds is a small attempt by us as an offset of the capabilities and tools that make data nerds. People Nerds have always been a part of making great products and services, but effectively we’re trying to call attention to this important capability, which is not really at odds with being a data nerd.

I always know I have a people nerd when I ask them “Why do you do this job?” and the first thing out of their mouth is “I love people.” I love the ones that say, “I love people and I love numbers.” I think at the center of the bullseye, you can have a PhD in anthropology and really have devoted your life to understanding people and culture, but there are many forms or styles in which to become people nerds who pursue it in their day job.

What kinds of clients typically use dscout?

There are typically two camps: The disruptors—companies that have a product or solution that disrupts the current market, and those companies are intense and intensely curious. They’re really building user experience teams. Often times they have a major design focus, so that intense curiosity comes with this desire to really understand lots of aspects of the user experience. Not just what people are clicking or why, but who they are and what motivates them. They want context as to how they use the their product or service.

There’s also the traditional retailer or bank or credit card issuer, or automotive manufacturer. They face their own set of challenges around how to maintain relevance in this rapidly changing world. So they want to understand early adopters and the things they’re choosing and why they’re choosing those things, and how people respond to things they’re working on. We work with small, two-person research and design firms, to some of the biggest players in Fortune 100 consumer-facing businesses in the world.

Is it difficult recruiting a good cross-section of dscouts?

It depends on the type of research we’re doing for a particular company. There are certain questions that lots of different people can answer, and there are certain questions that require very specialized respondents. We have more and more ways to find people today, so it’s getting easier across the board, and I think it will get radically simplified in the next couple years.

I’d say that compared to the historical benchmark for qualitative recruiting, the things we can do today take a day or two instead of a week or two. You can get more people, and have a more authentic or fact-based understanding of them than you certainly could get even two years ago.

How do the scouts record their experiences? Walk me through this.

Essentially the big change with a service like dscout, is you’re moving from “tell me about something after the fact”—which is the paradigm of a lot of research—to “show me something as close to when it happens as possible.” That’s the basic context of the shift, and that shift parallels with the fact that the way we use products today is pretty nuanced and complex, especially through mobile technology.

If I told you, “Tell me about your use of mobile gaming in the last few weeks,” I’d get some pretty generic answers. But, if I asked you to show me, over the next week or two, moments when you are playing mobile games and where you are, and what’s going on, I get a much more precise understanding of what you’re doing. I can see screenshots, you can share videos with me, so that basic shift is moving from something that’s more generalized and based on recall—which can be very faulty—to something that’s in context and as close to the experience as we can get.
Same things play out if you want people to develop ideas. For instance, if I say show me moments when you would love to be able to instantly buy something and have it delivered in the next 30 minutes, I see something really different, because I’m now using the context of your life, to get much more specific.

Are you ever really surprised by the results you get?

There’s always a measure of surprise, but then you think it makes sense. Then I think that there’s often the surprise that comes from just seeing the nuance and richness of human life. Designers are asked all the time to come up with use cases for a new product or service, and when you’re drawing from your own life, you come up with pretty staid ideas. But when you see the range of humanity and the things that people need—like instant buying—where people were like, “I need an anvil right now to hold this thing down,” or “I need a rope to take down a tree limb,” or “I need medicine for my dog that was just neutered,” it’s surprising.

Images taken from “Putting a Finger on Our Phone Obsession,” courtesy of dscout.
Then there’s macro surprise. We did a behavioral tracking project, and we looked at how often people interact with their phones. We counted discreet interactions—touches, clicks, swipes. The average person in our study had 2,617 discreet interactions a day, and then the top quarter was like 5,000 discreet interactions a day. Now was that truly surprising? Yes, but then again, it’s that Greek tragedy thing that, in retrospect you think yeah, I guess that makes sense.

I think whenever you’re trying to create impactful research, you’re always trying to look at things to open up your audience or to get them to think about something differently. If I said you use your phone two hours a day, that’s about right, that seems normal. But when you get it down to the interaction level, it feels really different, right?

What you realize is that each one of those interactions gives us just a tiny little bit of your mental bandwidth, and also it drives home why experience design is so important, because we’re experiencing an enormous amount of stuff right now. It gets you to think about these issues of cognitive load and how to become more efficient, and that the interactions we’re providing people are more special.

That’s the sort of thing that really hits people or gets them to feel when you’re talking about it in a way that’s very different than more generic ways of sharing insights.

Yes. 90% of all qualitative research is still done in focus groups. Focus groups, to me, are a little bit about research and a lot about teams. It’s really about giving yourself the time to go sit behind the glass in the dark with a team of people and think about users. It’s the experience more than the actual veracity of the research. Some of it is just simple path of least resistance.

If you think about the two tent poles of research, which are focus groups and surveys—and those were really put in place in the ’50s and the ’60s—they make various assumptions about humanity, which probably many of us have come to question. Our ability to be rational about the choices we’re making, our ability not to be influenced overly by our peers in a social setting—those are things we no longer believe as much, but the industry is still very much driven around those two basic premises.

I think that market research has what I call a needle and drug problem. The drug, which is understanding, getting closer to people, understanding their patterns more intimately, is a benefit which will last a long time, in that it’s going to become more and more important for businesses. But the ways to get to that information—the needle—surveys and focus groups, are going to come under significant pressure in the next couple of years from other ways of collecting information.

Do you have any theories on the way the pre-election presidential polls were handled and why they got it so wrong?

First off, a lot of the polls were in the margin of error at the end, so they leaned maybe the wrong way. I’m sure a lot people that did them would claim that they were basically driven by the margin of error, so they weren’t technically wrong, but they were statistically inaccurate. I think the other thing is it’s based on historical data of election turnouts, and the turnout dynamics in this election were pretty different than in the past, so it’s a challenge with a lot of those prediction models, because they’re generally basing it on history.

So the question then is, “How would you get insight into some of those differences?” You need to look at emotional intensity and not just more staid survey responses.

I believe people who were probing a little bit more around the intensity of people’s feelings and how they were sharing those through social media and other things, did a better job predicting, because the Trump supporters have a very high amount of emotional intensity.

Then there’s remote control research, which is running surveys and never going to the “battlegrounds” and understanding what’s going on there. I think that people didn’t really get off the turnpike and try to reckon with what they were seeing. Michael Moore predicted the outcome of the election last summer, and I think a lot of it had to do with the fact that he lives in Michigan. He went places and listened to people and tried to get a sense for what was happening, not just looking at polls.

As a researcher, were you as surprised as the rest of us, or did you think it made sense?

No, I was definitely surprised, for a couple of reasons. I really felt like the famous [pussy] grabbing incident did Trump in. I didn’t think he could recover from that. The other thing is that I operate in “bubbles” like everybody else. I think that one of the most interesting things about social media, is that it has given us a false sense of confidence around how expansive our bubbles are, so we feel we’re in touch with so many more people and we’re seeing so many more things, that it feels like a broad representative statement, where it’s still actually fairly small and highly modest.