In the last three decades we’ve witnessed the demise of cassette tapes, the rise and fall of CDs, and the near end and now re-emergence of LPs. And through it all, Jeff Kleinsmith, creative director at Sub Pop Records, has pivoted at each turn, adapting and changing with the times. 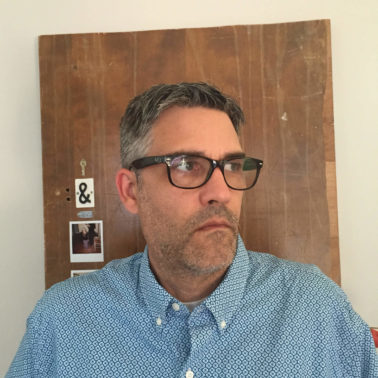 He started at the Seattle-based record label when bands like Nirvana and Pearl Jam ruled the airwaves. Not only was the music transitioning from hair bands to grunge, but the way music was played and packaged was changing dramatically, and it still is. Here, we talk to Kleinsmith about how his job has shifted and transitioned over the years, and what it’s like to work with musicians on their albums.

You’ve said that working in rock n’roll is a dream job some days and some days it’s the same as any other in-house gig. Tell me a little about that.

Well it’s funny. I do talks and I teach students, and I always get asked if this is my dream job. It is a dream job. I still feel that way after 23 years, frankly! But, I have to laugh at the notion that all we do is design album covers and go to rock shows. We’re doing a ton of behind the scenes stuff like creating very specific digital marketing tools or designing shrink wrap stickers, or editing catalog pages for a distributor. I think that’s not what these students are thinking of when they ask about the music industry. They’re thinking of Nirvana or Father John Misty covers or something. But that’s actually a pretty small part of our day-to-day job—creating the cover that is. Look, we deal with meetings, and last-minute crap, and clients not liking our mockups, just like anyone else. It’s the same stuff you would complain about if you were in a corporate job. Back in the old days, when mock ups were done on paper and hung on a wall.

What has been the biggest change you’ve experienced in your line of work at Sub Pop?

In general just the internet. When I started this department 23 years ago, my typical morning included turning on a hand waxer, firing up the analog photocopy machine, and drawing LP, CD and cassette templates by hand with a non-repro blue pen and a T-Square. Many of the bands had no real access to graphic design tools beyond the ability to FedEx a few physical items. And while I had a computer, it was the beginning of that change over to all digital, so I would produce a couple of art board mockups with colored tissue overlays and FedEx it back to the band. Then I waited for the phone call. A lot of bands had little idea how to “do design” and generally weren’t able to speak that language. Plus there were the physical barriers of communication back then, so there wasn’t much of a back and forth during the design process.

These days, folks are so savvy with computers and apps, and the world is so much more connected, that I can engage on every level of the design process with a band. They know what I’m doing and how I’m doing it. Sometimes this can be annoying—especially when they spec type or ask for a lot of revisions in varying colors and orientations.

A few years ago there was a project where I realized where things were headed: I received a little rough jpeg from a band that looked pretty cool, but it was tiny, like 300K. I asked for the high-res versions or physical prints so I could recreate it “professionally.” I was told that WAS the final art. They created it on their phone in a van on tour, and that was perfectly OK. Everything’s small and lo-res now! I think another huge change is that the artists are more involved in every aspect of the music business. It’s kind of more DIY across the board, which is really cool. Every single aspect of the process involves more contact and more involvement with the bands. It’s so much easier for bands to stay connected to the label—we can share stuff on a day-to-day basis in a more collaborative way. They are the ones selling it and dragging it around every night in merch booths, so they should love it. I’ll have plenty of opportunities to design more stuff.

Most people don’t buy physical albums anymore, so how has that changed the scope of the design where people are just seeing something that’s 100 pixels wide on screen?

It doesn’t change anything for me as a designer. My feeling is that one should design the physical artifact as needed and deal with the internet later. I would hate to think about album cover design that way, that it needs to look a certain way at 3 inches. My dilemma is that 100,000 people are going to see that pack shot and how many people are actually going to see the physical cover? I want the digital representation to match what’s out in the marketplace. For instance, many releases have no type on the cover, yet we’re often asked to add type for the digital version. I push back on that a little, as I have a hard time creating a sort of “incorrect” version.

Do you still design posters to sell records or promote events?

We still make posters, but it’s all merch now. We make retail posters for every single release and those are generally 24 x 24 and blow-ups of the cover. Those go to all of our retail stores.

After working with some bands, well, let’s just say I don’t love their records the same way because I’ve seen behind the curtain. But, it can also be great: Working with them makes me love the records even more. Sometimes that unseen side of musicians enhances the listening experience. What is your preference, vinyl or digital?

Oh, I prefer vinyl. It’s what I grew up on. I’ve kept all of it. Just holding it, seeing the cover, brings back a certain memory. I hate to say this, but if I’m designing something that I know will be digital only, I want it to look good, but it’s a different designing experience. I want to know that somebody’s going to get a copy of it and hold it and pull it apart and look at it. That’s just really important to me, for anything that I create. So yeah, absolutely LPs are my favorite.

But, vinyl has been gaining popularity the last few years. Our LP manufacturer, Stoughton in Los Angeles, I believe was making more specialty and old-school style jackets and boxed sets, and now it’s massively busy. So LPS are huge, and all the existing record-pressing plants are already booked out for months. Does that make you happy? Are you hopeful that this is going to continue?

Absolutely, yes, because it’s the most fun thing to design. But I’ve been in this business long enough, I’ve been alive long enough that you see things come and go. I don’t know if you’re noticing all the ’90s stuff that’s back that people are wearing, you just can’t believe that it’s back. So I’ve watched LPs completely go away to the point that we didn’t even make LPs on every release, we only made CDs on a number of them. Now CDs seem a lot less interesting or important to the bands.

I don’t think that anyone really loved CDs, but everyone loved LPs.

And it isn’t just old guys waxing nostalgic, buying LPs. Young people are buying and collecting them, as well.

Yeah, so that’s what makes it more difficult for an old guy like me to judge what’s happening. In some ways it’s easier to have been through all these things, but the way “the kids” reinterpret old trends now is so interesting. Why did some things from the ’80s and ’90s survive and others didn’t? Why mullets but not Famolares?

Stefan Bucher has never shied away from a challenge. In fact, the guy relishes...