Alex Fowkes
on Lettering the Landscape

Patience, solid footing, and a steady hand are important tools for a lettering artist working at a large scale, but nothing trumps talent, which Alex Fowkes has in spades. His work can be seen in ads, on the sides of buildings, and interiors of office and retail spaces. 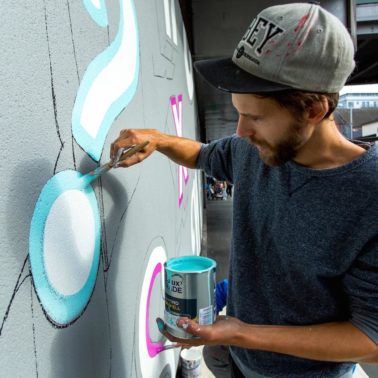 The English artist studied design and illustration in school, but by third year decided to focus more closely on typography and lettering, after being told by an instructor that he wasn’t considering the type in his designs. So he immersed himself in typography, and gradually honed his skills over the years. He landed his first major gig with Sony Music a few years back, creating a visual, music timeline throughout Sony’s London headquarters. It was so all-encompassing, he quit his job and never looked back.

In 2014, his first book, Drawing Type, was released by Rockport Publishers in which he featured the work of more than 70 lettering artists.

How did you teach yourself lettering and the nuances of typography?

I learn, building gradually. If I try to do too much at once, I can’t really see the end so I tend to lose interest fast and become distracted. I have to do it in little bits, progressing one skill at a time before combining at a later date. It’s something I am honing and learning about every day, and will be for the rest of my life. I used to love drawing patterns over and over, filling pages with repeating geometric shapes. I applied that state of mind in my earlier years to typography, and thus have come up with the work I have been doing recently for clients such as Sony Music, O2, Toyota etc.

I think it’s important to be influenced by a totally separate industry or work process as it allows you to think in new and interesting ways, and ultimately develop and progress.

Tell us about your work for Urban Outfitters.

I’ve done a lot of work for Urban Outfitters over the years, probably around six stores all across Europe. Two of my favorite are in my hometown of Nottingham, and in the heart of Munich, Germany. The huge 9 x 3 meter concrete wall mural in Notts took about eight days—around three days designing, and five days painting. I have a good friend who happened to be the store’s resident artist, so he helped me paint for a few days, too. That’s what I love about UO—every store has its own workshop and an in-store artist who makes everything for that store. No prefaced stuff, just raw materials and creative people. It’s a really great ethos, and they really know their brand. I was in Munich for about four days drawing all the type on the light boxes, etc. It was a temporary store, but they went all out! Another great experience.

Did you have your designs all mapped out before you start, or is it kind of impromptu?

Munich was totally impromptu. I just knew I was going out there to do some signage, but I had no idea I would be working on a huge lightbox room! I like that kind of situation—just trusting your gut and going for it because the pressure is on, is kind of liberating.

You can’t question anything, and you have to be confident in your decisions.

I love responding to a space while I’m there. I get so many ideas from experiencing a building or environment, not just from the room I’m in, but the whole space. I like to react to its styling, and help elaborate on its overall message. As for the Nottingham job, that was all preplanned and signed off. It just needed a few variations and tweaks during the process.

What happens when you mess up?

Sometimes if I don’t like something, I’ll improvise. I’ve learned if I make a mistake, trying to cover it up often just makes it worse, so it’s better to just leave it and finish what I’m doing, take a step back, and see what I can do to fix it.

What’s the longest time you’ve been on your feet or hunched down doing a large-scale project?

The longest time I’ve spent designing a mural is easily the Sony Music Timeline. I sat at my computer for just over two months straight designing the layouts, often working 12-hour days and weekends. That was by far the longest slog I’ve ever done on one thing. As for the installation, that was only two days.

How do you stay in the right physical shape to do this?

I’m a really active person as it is. I spend summers cycling and skateboarding, winters snowboarding, visiting campsites in my VW van where I’m often working too. I personally think it’s about having an active lifestyle, rather than trying to keep in shape. If your everyday life is filled with active tasks like cycling to get your eggs from the farm, or collecting water for the van, you stay in physical shape naturally. I have never stepped foot in the gym, and I never will—the natural world has everything I need.

Do you ever look at a white wall and get intimidated, or is it always just a clean canvas?

I used to, but now I get so excited at what the possibilities are. I just want to get the paints out and get started!

Are you having fun doing these installations?

So much fun. It’s what I want to do the most. I live in a digital world, where everything moves so quickly. I feel so much pressure to do everything as fast as possible, and it can often make me rush work because I’m looking at the screen and struggling to really craft something beautiful. Once I start painting a mural it’s like all those things disappear. All I’m doing is making sure I have enough paint on my brush, and my lines are as clean as possible. Those are the only things in my head, and I love the simplicity of those thoughts.

Do you listen to music while you work?

I used to, but now not so much. I’m often just painting in silence. I think it adds to that feeling of calmness and simplicity. However, on the computer the only way I can concentrate is to have my headphones on, and really zone in to what I’m doing. When I’m painting or drawing a mural, I don’t need that because I’m so fixed on the task at hand, I don’t need music to block out distractions.

I’ve been so lucky to do the projects I have. The Sony Music Timeline is probably the craziest. I often wonder if I could ever beat it, really. What makes it crazy, is that it was my first ever freelance brief, and I had to quit my full-time job to do the project, which is very scary, and it was for one of the biggest music labels in the world. The brief was to essentially decorate their Kensington headquarters. It ended up being 150 square meters in size, took me six months to create, catapulted me into the design world, and gave me the ability to set up as a credible freelancer with a big name client already under my belt. Still blows my mind to this day.

JJ Sedelmaier has been the co-creator and producer of some of the funniest animated...

In the past few years, a sexual revolution of sorts has been happening globally,...