A lot happened in 2016. We lost some great artists (David Bowie, Prince, George Michael, among others), the Chicago Cubs won their first World Series in more than 100 years, and Donald Trump was elected president, despite all the predictions to the contrary. It was also a great year for editorial illustration, as political satire played out on magazine covers, and within the pages. 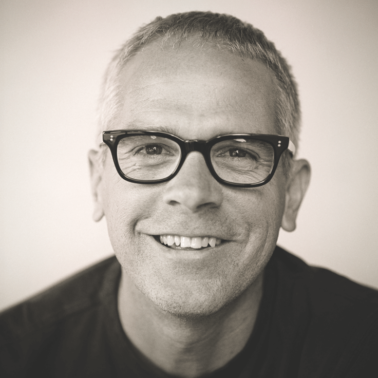 Pentagram partner, DJ Stout, takes us through his top five (technically six) cover picks for the year, and why he thinks they work so well. As a publication designer for the past 30 years, Stout knows a thing or two about what makes a successful magazine cover. In the ‘90s he was the celebrated art director of Texas Monthly, where he captured the hearts and souls of Texans, and the admiration of designers and art directors everywhere. He loves the challenge of communicating big ideas in the simplest possible way. Last year, his monograph, Variations on a Rectangle, was published. It covers his 30+ year career, and features more than 250 projects. 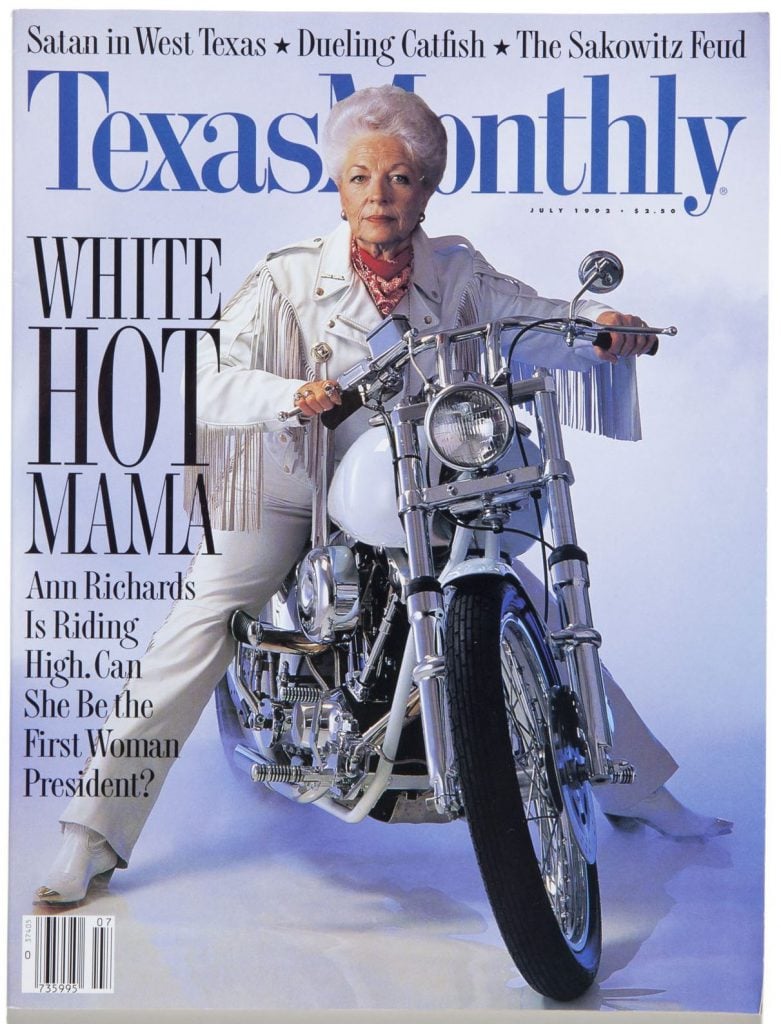 What’s your criteria when judging a magazine cover?

Keep it simple. I always want the idea to resonate right off the bat, so my philosophy is that a magazine cover is like a really good billboard. When you’re driving by really fast and you see it, it has to communicate quickly, and it has to be simple.

All newsstand magazine art directors are trying to find that simple communication. Where I’ve gotten off track in the past is when I’ve come up with an idea that I think is kind of funny, but it’s too complicated … it takes the reader too long to get the joke.

My thing is, you can almost not keep it too simple. 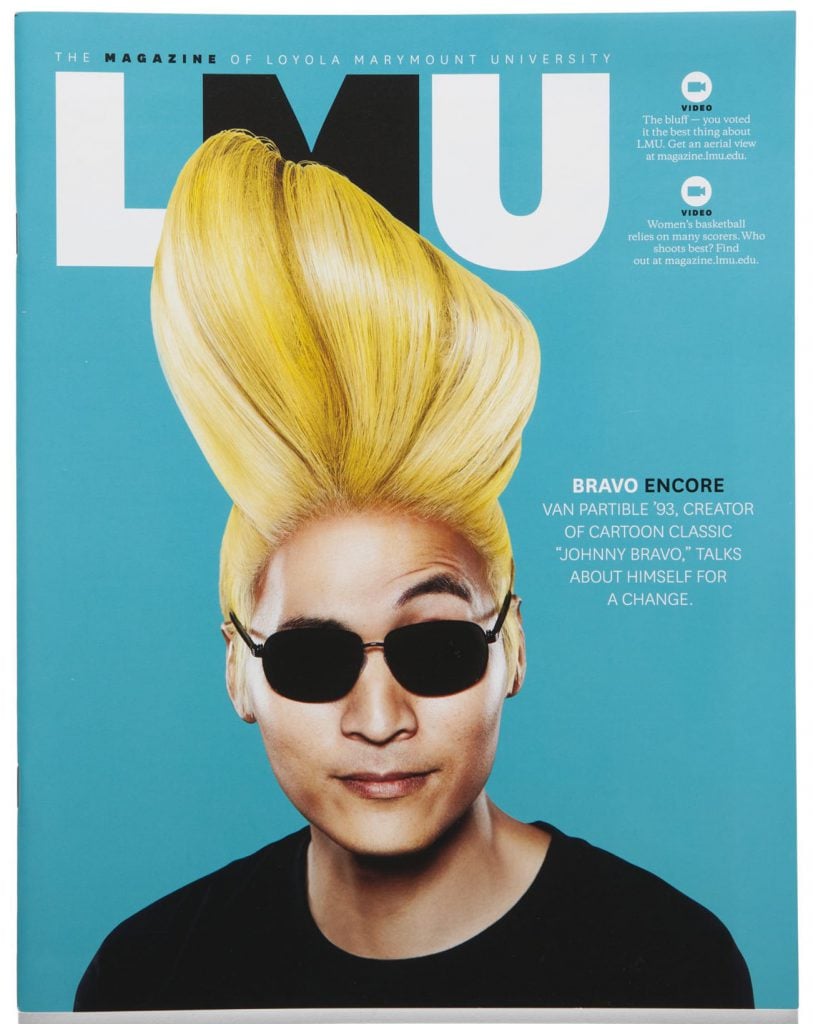 What’s so great about the covers you’ve chosen for 2016?

This presidential campaign has lent itself to some really fantastic covers, because of how outrageous this campaign was. It made great political commentary, because the subject matter was so rich. Political cartoonists and commentators in the art world have done some of the most memorable pieces based on political adversity throughout time.

There have been times over the years when illustration has fallen out of favor. There were a lot of magazines I’ve worked with, and when I would suggest illustration, [the art directors and editors] were terrified of it and didn’t know how to work with illustrators. I’m glad that’s changing. You’ll notice that all of the covers I picked, but one, are done by illustrators.

I love when illustrators are leading the charge. 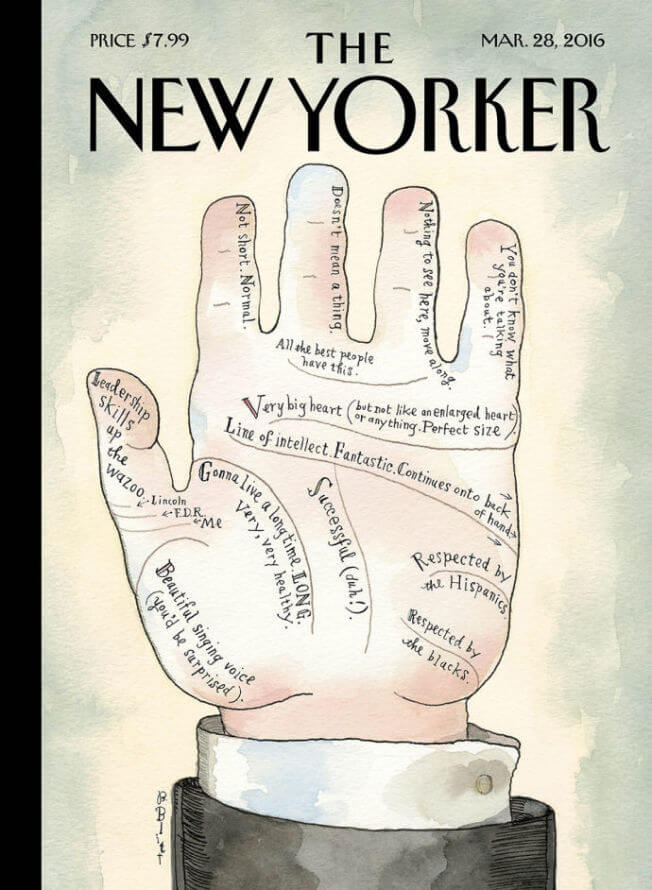 Barry Blitt is one of the best political cartoonists/illustrators working today. He did a bunch of The New Yorker covers about Trump during the campaign. They’re all just right on target. He’s really knowledgeable about what’s going on in the world, particularly in politics. He does these drawings that get right to the heart of it.
That’s Trump’s little hand, and it’s perfectly timed. Trump was getting all bent out of shape because someone made fun of how short his hands were and it was in the news, so then Barry does this illustration of one of his stumpy little hands. It’s like a palm reading chart, but all the verbiage on the hand is classic Trump. That’s what makes it so funny.

It’s a different way to do a caricature of a politician without showing the politician. It’s perfect satire.

One thing I really admire about The New Yorker is they do serious commentary on their covers without any text. 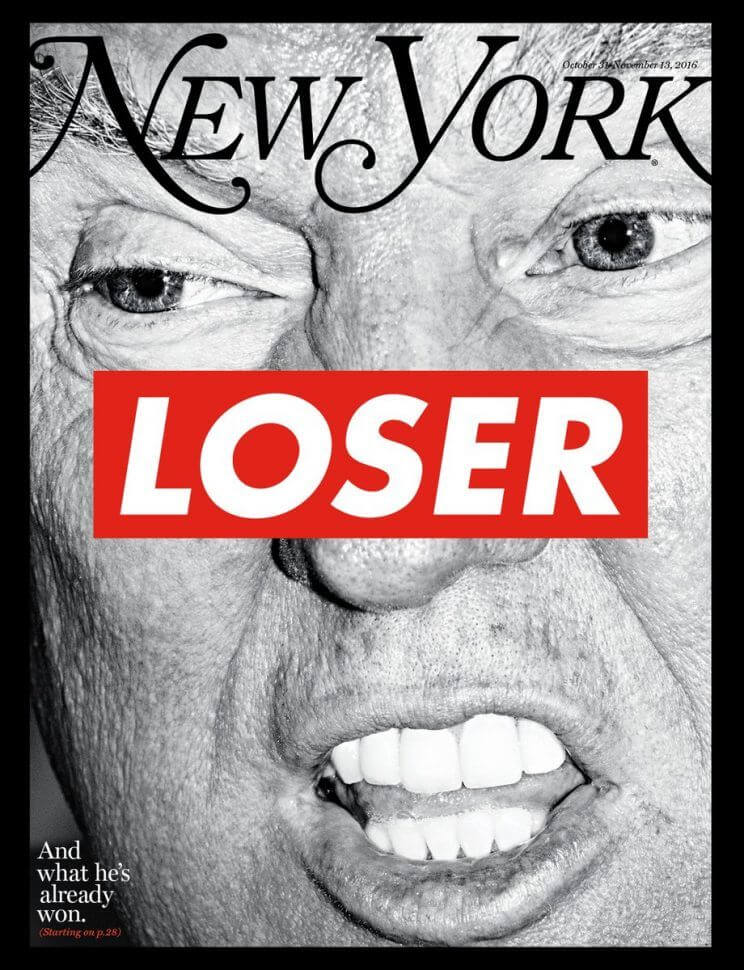 Barbara Kruger takes simple images that sum up what’s going on at the moment. When I saw this, I thought, “That’s pretty brave.” It was pre-election. In a way they were calling out that he was going to lose and they were going to rub it in his face. That image says everything. It’s such a horrible photo of him.

Then I read that right when they were about to go to press, FBI Director James Comey reopened the Hillary Clinton email investigation. In the newsroom, they were getting nervous, however the editor, Adam Moss—who is a super smart guy—decided to keep it the way it is. Because, if you read the article, it says even if he wins we’re all losers. The American people are losers. This campaign with Trump in it affected politics forever, and how the American electorate works. It got really nasty.

Trump calls everybody a loser all the time, so they were using his language.

What I really love about the cover, even though he won, is I still think he’s a loser, and I think a lot of people in this country think so, too. 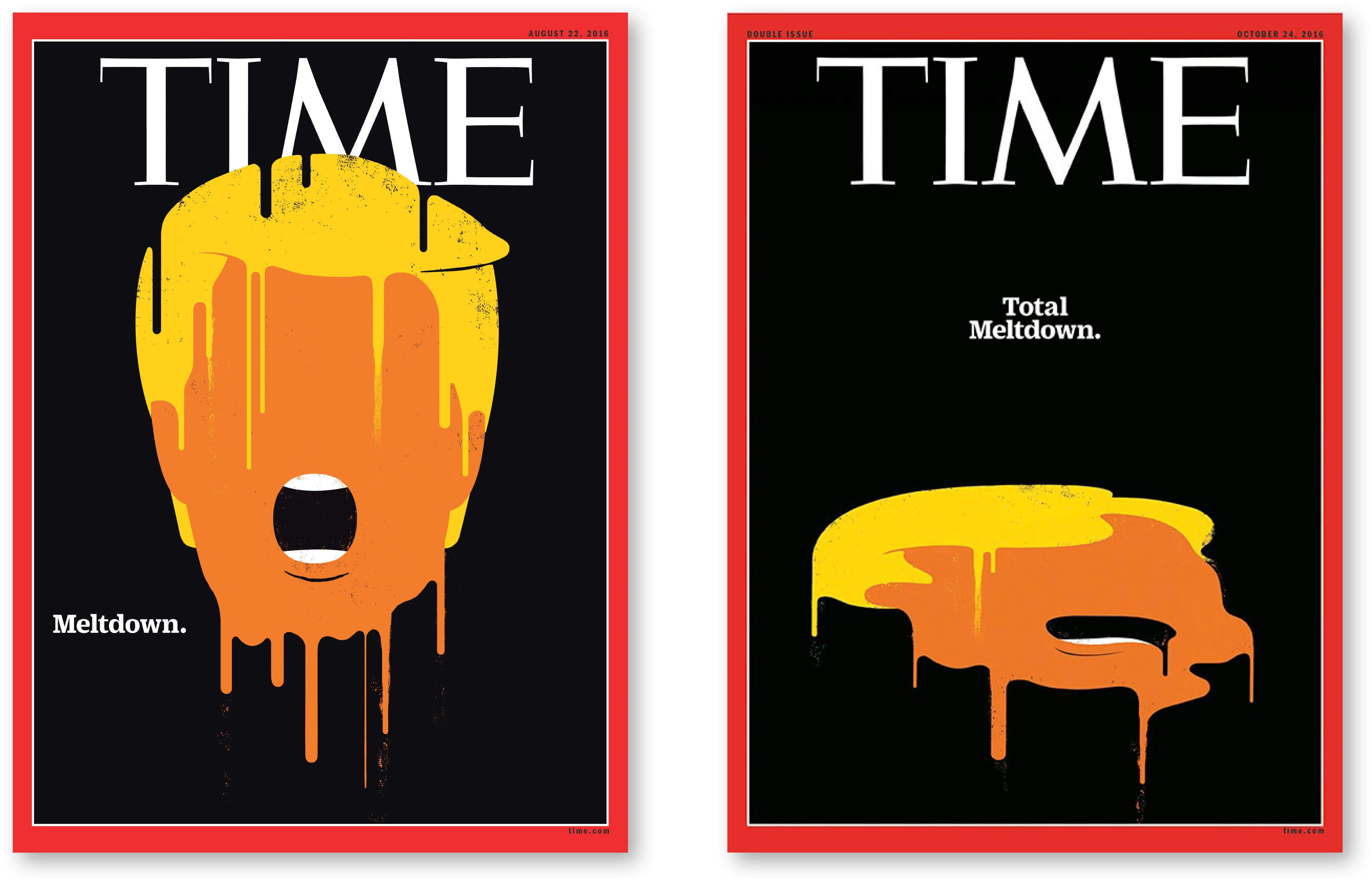 First of all, the timing was perfect. It was right when Trump was doing bad in the polls, after that revealing piece of footage came out—his “locker room talk.”

It’s so perfect, because you knew who it was and it’s a very simple idea. There are no eyes, just a mouth and Trump’s gross, yellow hair, and his orange face. It’s so simple that it didn’t even need the headline. In fact, it might have been better without it.

To me, what I really love is that it’s a smart illustrator making that statement. I love working with Edel Rodriguez. He thinks the way a really good art director thinks. It’s a visual image that’s simple and communicates something in a vital way. The fact that they went back to him to do the “Total Meltdown,” is even better. 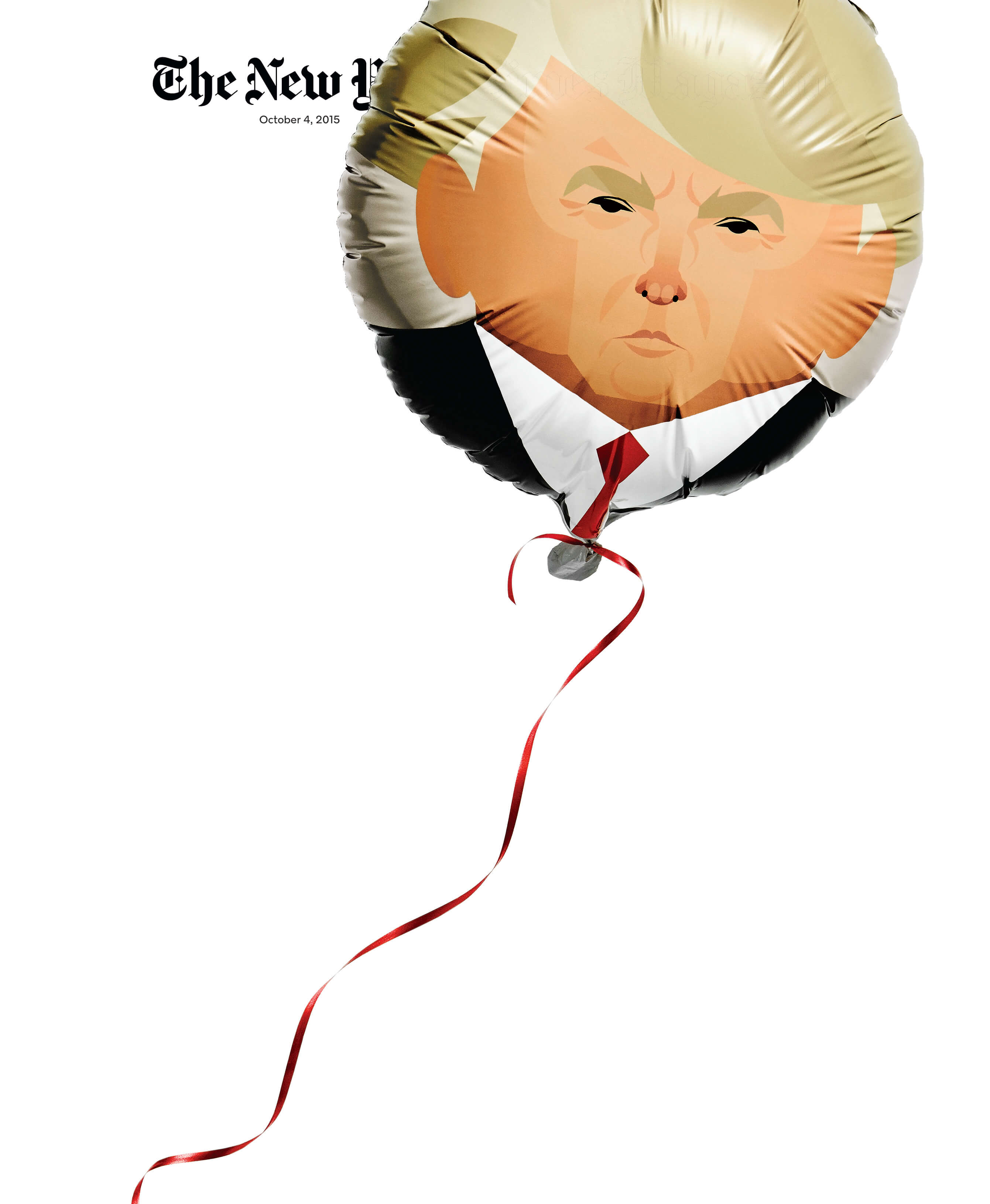 OK, technically, this is from October 2015 … The cover story was about how Trump was flying high, but the illustration was also symbolic of the fact that he’s full of hot air and flying out of control. It’s a little subjective. To some people it could be positive, but a lot of people, like myself, think it’s negative because he’s full of hot air. You have to draw your own conclusion about what the story is about and I love that.

The New York Times magazine can go out of their way to always do something very unique on the cover. They can afford to because they’re not on the newsstand. If you have the right story, I think it’s bold and confident to not spell it out.

It’s a simple idea, but the execution of that idea is really critical. A simple idea can fall apart if it’s not produced correctly. Stanley Chow painted Trump’s face, and then they called 50 or 60 places that make these kind of balloons, because they couldn’t find someone to put that face on the balloon fast enough. They finally found someone to do it, so they had 40 or 50 balloons made and sent to them.

They had to account for the illustration on a round balloon, and what it would look like stretched, so they blew them up to make sure they looked like Trump. Jamie Chung photographed it. It’s a simple photo, but it had to be done in the right way, with the right light. I love that it has this poster quality. 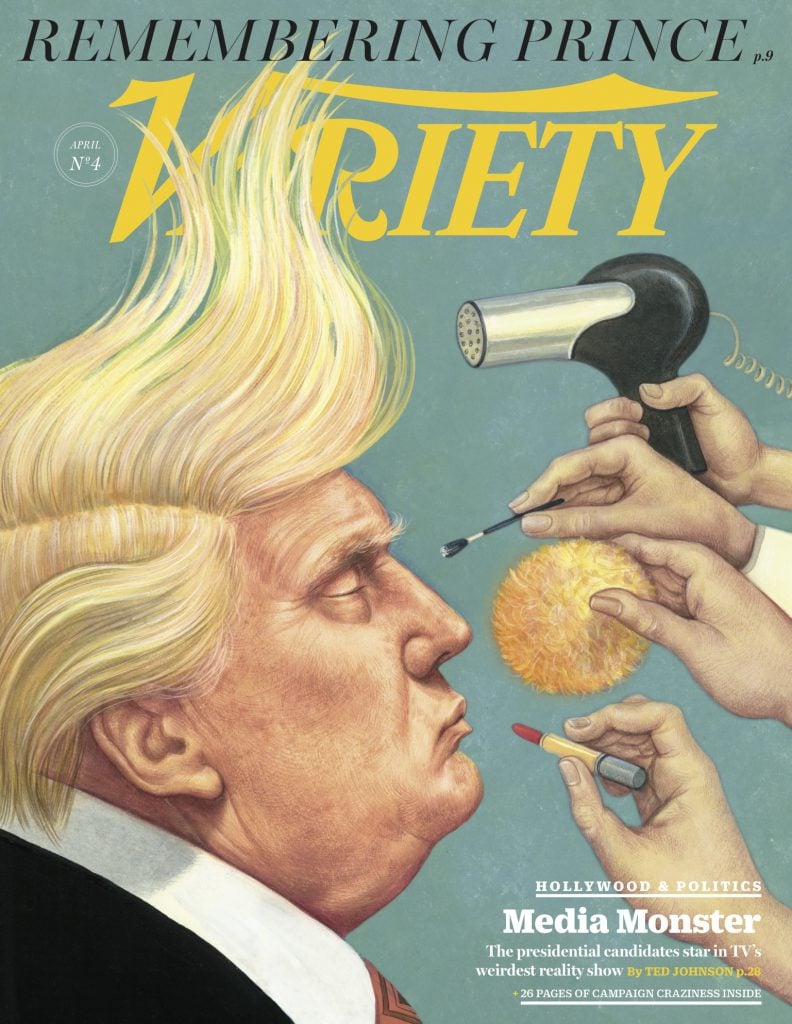 Anita Kunz has done a bunch of covers for Variety over the years. This is a nod to a famous Esquire cover done in the ’60s. The editor of Esquire, at the time, was a guy named Harold Hayes. He did one of the most brilliant things ever. He hired George Lois, an advertising art director, and said I want you to do my covers and we’ll write stories to go with the covers, as opposed to working the other way. Harold had the foresight to say, “I want to get this great ad guy to come up with imagery about what is going on now.”

Those covers that George did have always been to art directors—particularly me—a high benchmark. 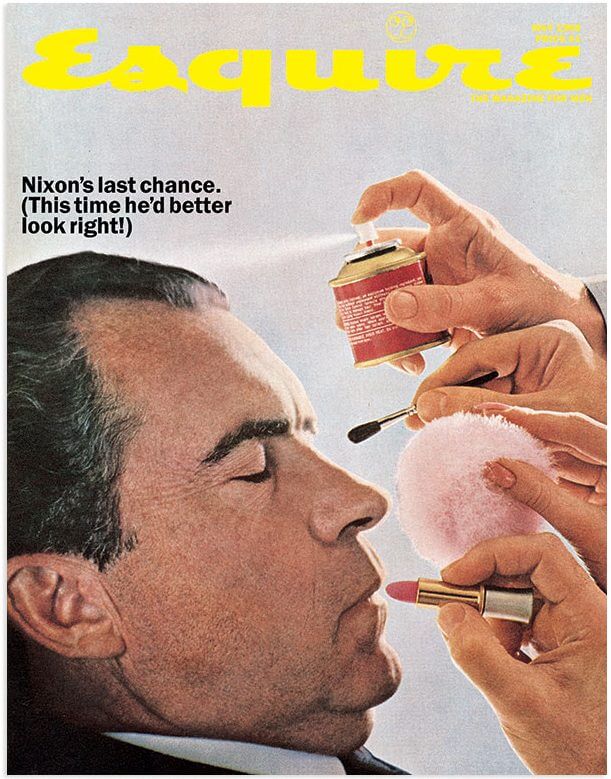 Anita Kunz is really great with political commentary and this image of Trump with his hair blowing straight up over the masthead is brilliant This cover is a tribute to a 1968 cover that George did of Nixon, mocking his 1960 television debate with John F. Kennedy Jr., where he performed badly.