Robert Smigel
The Man With the Dog Puppet Fist

News coverage of the 2016 Presidential Election was overbearing and underwhelming. Late night television provided some of the best comic relief, but one of the greatest characters taking on the election was Triumph the Insult Comic Dog, aka Robert Smigel, in "Triumph's Summer Election Special 2016," on Hulu. 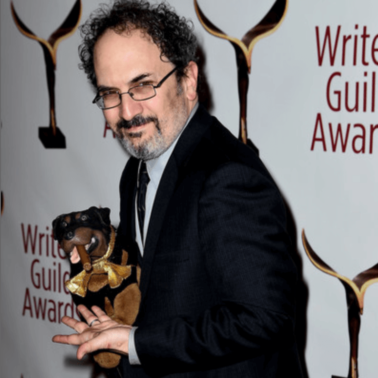 Smigel has had his hand up Triumph’s ass for 20 years, after debuting on Late Night with Conan O’Brien. As Smigel stands out of the camera’s view, Triumph openly pokes fun at people on the street—whether at Star Wars premieres or political rallies—often inciting laughter and sometimes hostility. Either way, it’s always comedic gold.

Here, we talk to him about his election specials last year with his cigar-smoking puppet, and how he prepares for these events.

Where did Triumph’s voice originate and why the cigar?

My mom’s parents, aunts and uncles were all from Russia, so I heard that accent all the time as a kid, and always imagined dogs would talk that way. I really don’t know why dogs, as opposed to other animals. I’ve said in the past that maybe it’s because they have the same wide-eyed wonder as a turn of the century Russian immigrant arriving on Ellis Island. … “Loook at all of dees!” Yes, it’s horrible, or at least horriblish. But I was 8.

I imagine you have a bunch of questions planned when you do these street interviews, but how much of it is off-the-cuff, based on what you’re hearing and seeing?

The first time we did a remote, we went to the Westminster Kennel Dog Show, and it was mostly improvised. Then we decided to go back and I figured we’d better have some jokes if we wanted to top it. So we did, and we did. Since then, improv obviously happens but we always have plenty of jokes.

Do most people address the puppet or do they look at you?

It’s always been about 50-50. It’s always a source of fascination to see who will look at me or at the puppet. The hammy people tend to look at me.

Have you ever been attacked? As a viewer, I’m frightened for you.

One drunk guy outside the Boston Democratic Convention in 2004 (never aired, it was for an aborted movie) was cutting it up with me about Leno and stuff, and seemed fun enough as we passed him on the way to some event. Then, on the way back, we passed him again. So Triumph approached our old friend, but now he was drunker and comfortably transitioned into his angry phase. He immediately charged the puppet with a hearty, paranoid “Hey, back off, man!”

We talked him down like the compassionate bros we aren’t, and went on our way.

The inauguration was so ripe for the picking, and some of your lines—though insulting—were met with laughs. Do you find most people have a sense of humor about themselves? And if so, would you rather they didn’t because it makes for better TV?

When I started doing these. I was thrown out of Westminster and people loved it. So, I assumed that making people uncomfortable or angry was part of the equation. Like when I’d watch Groucho Marx harass Margaret Dumont, or Rodney Dangerfield in Caddyshack. But we quickly learned it didn’t matter. Bon Jovi invited me to their concert, and I actually trimmed some of their laughter out of the piece out of fear that it would throw off the bit.

With politically-tinged segments it gets a little murkier, because many people are watching with an agenda. When Triumph’s with Trump supporters, it seems half the viewers are hoping they’ll be bad sports, and half are hoping they’ll laugh it off. Most laughed partly because, as a rule, I generally approach people first and ask if I can talk to them.

But I did get threatened a couple of times by people whom I hadn’t even approached. They just kind of watched from a distance and came over to make trouble. Politics tends to bring out the angry folks.

How much stuff gets cut before it gets on TV? Is it hours and hours of tape?

I would say more like hour and hour. It takes about two hours to get a piece like that inauguration bit.

And forty minutes of that is just me walking around looking for people to bother, or important work, like examining the pump that makes the fake vomit.

Do you do all the editing yourself? Do you get final say what goes into the show?

I always worked with an editor when Conan was in New York, or when we’d do travel shows in Los Angeles, Chicago, Atlanta, etc. But since the show permanently moved to LA, we have staff writers work with the editors, and they upload the content for me so that I can have a crack at giving notes on each version. So the audience generally sees something I’ve approved. But, ultimately, Conan can cut anything he wants before it airs.

In your Hulu special, you were able to interact with real newspeople at the conventions. Were they all receptive or were some assholes?

Not all were receptive, but I don’t want to assume those people are assholes. It’s quite possible they had no idea who Triumph was. Plenty of people still don’t. And at those radio booths in Media Row at the RNC, I broke all my general rules of decorum and just wanted to see how many radio shows we could ruin by having Triumph stick his head in and say something extra-wrong. So if you want to see some old fashioned pissing people off, dig that one up on Hulu (it’s on the Summer “Bonus Poop” episode).

Were you surprised to get an Emmy nomination for the show?

When I pitched the specials to Hulu, I made it clear that Triumph was indeed their ticket to the awards and respectability any network craves. Okay, perhaps it was the opposite, but, on the other hand, Triumph once made an album called Come Poop With Me, that was Grammy nominated, so maybe we shouldn’t have been surprised.

The Primary Special just won a Writer’s Guild Award, so at this point Triumph’s just going to go full Sorkin and expect a Peabody.

Are you doing any more Triumph specials for Hulu, or was that just an election season thing?

We only planned on doing election coverage, but I enjoy doing shows with Triumph so hopefully more will happen at Hulu or somewhere.

What’s your next big project?

I’m writing a movie for Netflix right now, not a Triumph thing, that I may actually direct. I think I may have already said too much. Shit!

Are you easy or difficult to work with?

I think the projects I embark on are often ambitious, and they can be very demanding of people’s time and focus. But I have a lot of people who’ve worked with me over and over on numerous jobs, so I guess they feel the product is worth it. Now, if you’re asking me, personally, I find myself to be a huge pain in my ass.

I would much rather read espn.com most of the day and track the Mets’ minor league prospects, but I insist on taking on jobs that require me to lie on the floor of a limousine so that when I hold up Triumph it looks like he’s getting blown by a poodle in the back seat. If you know anyone who could say something to me for me, I’d appreciate it.