As a guy who rose to popularity for his crude album cover designs for bands like Nirvana, Soundgarden, The Sonics, and Mudhoney nearly three decades ago, Art Chantry is still trying to figure out the design world. In fact, he’s adverse to most design these days and resists technology as much possible. The man prefers to work with his hands, manipulating materials, images, and type in a way that the computer just can’t do, in his opinion. 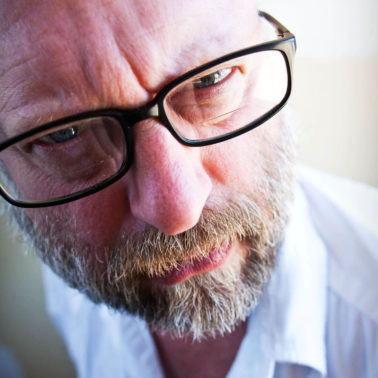 Chantry is an outspoken critic of modern design and designers, but despite that, he’s being honored as a 2017 AIGA Medalist. The irony hasn’t been lost on him. It just goes to show that good work is good work, and you can be welcomed into the club even if you’re an outsider with a bad attitude. Even he couldn’t believe it when he received the call from AIGA.

Here he talks about what’s wrong with design today, his hoarding habits, and why he’s such a pain in the ass.

That’s a loaded question. I do like SOME design done today. But, frankly, I look at old design, not new design. Old design, pre-computer design—when the IDEA was the coin of the realm. I look at contemporary design annuals and see this incredibly high level of mediocrity. Page after page of beautifully rendered (crisp and clean) design that all looks the same. About every 10 to 20 pages one piece will pop out like a huge sore thumb. At first you can’t figure out why. Then you realize it’s because it actually has an idea being presented. Most graphic design today is not really design. It’s decoration. Graphic decoration. It just has to look nice, or pretty, or cool. It has to fit in to a very high standard of production values that only computers can give you.

Any design work that doesn’t look exactly like your ‘comp’ is pounded down like a nail that sticks up. Ideas are erased so fast in an environment like that. These are all things that I try to avoid in my work. Strangely, ideas are all I have to offer any more. Computers don’t have “idea” buttons (yet). Do you think it’s really changed all that much—besides the technology.

Yes, I do. You don’t really need to know anything at all about graphic design to be producing graphic design—or at least something that looks sort of like graphic design. History and theory has all been lumped into the marketing category of “retro.” Working by hand is called “old school” or “dinosaur.” Producing rough looking artwork is “primitive” or “tribal.” It’s all mixed up and silly. When you only know the language of graphic design through terms like that, you do incredibly shallow work. Ignorant work. When I use the color yellow, it means something. When I use a ratty line rather than a crisp, clean 1 pt. hairline rule, it’s because I’m saying something. When I use a square instead of a circle, that is language, not taste (squares are male; circles are female). Pretty vs. ugly? Those are just tools I use. Making things intentionally ugly to get a point across, is actually really difficult.

What is the most upsetting thing you’ve witnessed in graphic design?

Oh dear.  There’s so many.  Almost all of us are utterly ignorant of the world we live in.  We don’t know anything.  I’ve met graphic designers who have tried to tell me that Paul Rand created the happy face, that Milton Glaser created psychedelia, and that grunge graphics were invented in Southern California. I once taught a workshop at RISD where the students (graduate design students with at least 8 years under their belts) didn’t know the difference between “silkscreen” and “offset litho.” They actually asked me to explain it in diagrams!  This is the medium they master?

Are there any designers who’s work you admire?

Many. Chuck Anderson, Chip Kidd, Jesse Marinoff Reyes, Jacob Covey, even Shepard Fairey. Oodles of others whose names I can’t recall off the cuff. But, I sort of ignore most contemporary design. However, designers of the past? So much brilliance. You can sit back and re-read those pieces forever and never get tired of them. Most designers today are virtually untrained. They just make things “look purdy.” Have you noticed what’s happened to logo design? Dreadful. A right mess. Design 101 level thought. Awful.

Do you use the computer at all for designing?

The entire print production process paradigm has been digitized. My finest art form is the mechanical. I’m brilliant with mechanicals. I can talk DIRECTLY to a printing press through the paste-up. But printers don’t have stat cameras or darkrooms any more, so I have to present my work in a digital format. I’m forced to transfer it over that way. Frankly, when I do, the quality of my work drops.

For instance, did you know you can’t take apart the overlays of a mechanical, scan them, and get them to register? I’ve been trying to get that figured out for literally decades. I’ve even tried to hire computer programmers to figure out how to do it for me. No good. My stuff doesn’t transfer well over to digital. It’s too gridded, too tidy. Computers don’t speak the same language as a printing press. Everything gets lost in translation. Computers and print even work in different chromatic structures.

Designers today just make a clean comp on their screens and give it to the printer and say, “make it so.” Do you realize how much you LOSE when you do that? It’s like reading the graphic novel rendition rather than reading the novel itself.

But, I can go on this way forever. I seem to be alone in my opinion. It’s a brave new world out there (of lesser quality). It’s not my problem anymore.

You seem to be obsessed with objects. Do you still collect a lot of stuff?

Well, I come from a long line of hoarders. Recently both my mom and my sister died (cancer) and I had to clear out their houses. That was awful. Ever since then, I’ve been much more interested in getting rid of stuff. I’ve stopped collecting. Now, I give stuff away. Nobody ever walks away from my studio empty handed. They express interest in something, they get it shoved into their hands. I’ve found the best reception for my old crap has been from the local historical societies, museums, and archives. They flip over backwards when I drive up with a truck load of local history. Academics are never swift enough to see what needs to be grabbed when it’s still alive in pop culture. By the time they realize something was important, it’s years or even decades gone … in the landfill. But, that’s what I save, and eventually, they get it from me. I get rid of stuff and they get some amazing artifacts for their archives.

You’ve always sort of been a design outsider—by choice—so are you surprised you’re an AIGA medalist?

I’m deeply honored and flattered by this award. I fully appreciate the importance and the tradition of this honor. It’s truly something I never dreamed I’d be awarded.

That’s just copycatting—monkey see, monkey do. I thought the graphic design world forgot I ever existed, so when I got the call from AIGA, I thought it was some sort of sales pitch (like a membership drive).

You’ve been described as a curmudgeon … are you really, or do you hide behind that persona?

To be honest, the curmudgeon characterization was designed by myself over a long period of time. I was the very first person to call Art Chantry an asshole. It was a way to separate the good from the bad when dealing with a constant stream of new clientele. How they dealt with that “curmudgeon” reputation, informed me whether or not I could work with them. When people come in my door flipping hipster attitude, I pretty much chop them up and sell the pieces to the local gourmet restaurants. People who come in my door acting like human beings, treating people around them with honesty and respect? Those folks I can work with. You can actually collaborate with them.

What kinds of projects are you working on now?

The same sort of things I always work on—piece work. Small clients and small businesses, art groups, nonprofits—basically, anybody who will hire me. I scared off corporations decades ago, but they were terrible to work with. It just about killed me working with those people. So, now I only work on stuff I believe in. It saved my life.

Edel Rodriguez: Doesn‘t Melt in the Face of Adversity

The political discourse in this country has been at a fervent pitch for months,...

A lot happened in 2016. We lost some great artists (David Bowie, Prince, George...