At the 1989 National AIGA Conference, Tibor Kalman took the main stage and talked about what was wrong with design. He then proceeded to point the finger at an ad Joe Duffy and Michael Peters put in “The Wall Street Journal” as an example of bad design. Duffy, who was in the audience, was stunned and completely caught off guard. 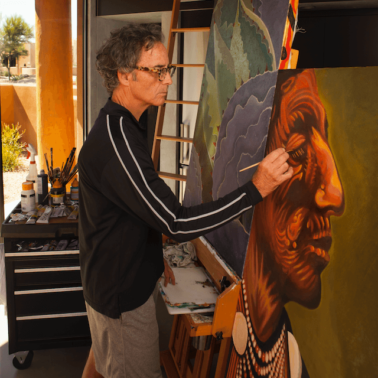 It was unprovoked and unfair, to say the least. After the onstage debacle, Duffy called for a session in which he could respond to Kalman. It was perhaps too little, too late. Kalman’s wrath had already gone viral, or as viral as things could go in 1989. So, Print magazine’s editors invited the two to sit down in their New York office, with Steven Heller as moderator, and published the debate. It’s recently resurfaced online, so I wanted to talk to Duffy today, 28 years after the fact, to get his take on it. Kalman, of course, passed away in 1999, and was feisty til the end.

Duffy is still designing, but his son and daughter—who are his business partners—are mostly running the show at his Minneapolis-based office. He prefers to paint as much as possible.

Tell me what happened at the conference?

Tibor was a different guy. I was in the audience. We knew one another, at least by reputation back then. I think I was on the national board of AIGA at the time. He knew I was going to be there. He took it upon himself to tell the audience all the things that were bad in design, and as a summation he projected this full-page ad that I took out with Michael Peters and said, “Now here is a perfect example of what’s wrong with design,” or something like that.

It was a cheap shot, to say the least. It was like this 12 year old boy on the playground that was jealous, basically. What did you think when he did that?

I looked at my friend sitting next to me and said, “Do you believe this?” It should have been obvious to people in design that the simple idea behind running an ad for better design in The Wall Street Journal was to elevate design, to speak to the people who owned brands that touched lives all over the world. Our point with the ad was you should be talking to guys with art degrees as opposed to talking to MBAs, because through design, we can really help big brands. The Wall Street Journal, obviously was the perfect vehicle for that.

And another thing, probably a month or so earlier, Tibor had made a presentation at the Walker Art Center in Minneapolis, and he showed all the work that he was proud of, and then he showed some work for The Limited, and he said, “These are the ads that paid for my suits.” In other words, it wasn’t design that he was proud of, but he made money on it.

He compromised a number of times. For him to say that I was compromising when I think it was pretty clear back then we were only doing work that we were proud of, was needless to say, very upsetting.

It sounds like they gave you a platform to respond to him, but it didn’t go over very well, or maybe it was too much after the fact.

Well, I think that’s what I resented most about him doing that. He knew I was going to be at the conference. If he had said, “Hey, Joe, I’m going to challenge you to a fight up here on the stage,” I would have said, “Grand.” I would have been prepared. I would have had the same kind of responses to his charges at the conference in front of all those people that I had later when Print did the interview. It was really childish of him, but that’s the kind of person he was. Sampling of logos designed by Duffy.

What’s interesting about that whole debate is, in many ways, you guys really were on the same page about most things, but he kept poking you, and in effect, criticizing your ethics and design sensibilities. In particular, he brought up the packaging you designed for Classico Pasta sauce, and talked about packaging being a lie. You pointed out that it’s communication

Yeah. This is true. Packaging focuses on the positive aspects of the product. You’re not going to say, “It tastes great, but you’re going to get fat if you eat too much of it.” Or that there are some ingredients that may be damaging to your health. Is packaging perfectly honest? No. It is what it is. It’s a way to get people’s attention, and it is a way to separate a brand from the brands it competes with—it’s a business proposition. He said, “You’re making this look like it’s from Italy and it isn’t.” My response was, the guy who owns this brand, his mother is Italian and she made up these recipes. The recipes that she made up came from different regions in Italy, so we depicted elements from those regions and gave it a style.

To me it was truthful, but he was doing everything he possibly could to say, “Your design is bad and my design is good.”

Tibor said, “You think design is a business, and I think it’s art.” He quoted Art Chantry as someone who was a design hero, basically doing the kinds of work he wanted to do. Interestingly enough, when I interviewed Art a few weeks ago, he said the opposite: “Design is not art.” I think most designers would agree on that.

If you step back a bit, it is art. When we first started Duffy, I was making art for posters and packaging. I was literally making art the way I wanted to make art. I also had to put my business hat on and say, “Okay, how am I going to sell this? How am I going to address all the things that the client wants in order to project the right image to this art?” It’s this balance, and I still believe it’s art today. I consider myself an artist. One of the reasons I love to paint is that my paintings inform my design. I learn about color by mixing colors, I discover something in a portrait that I might be painting that lends itself to some aspect of a design that I’m working on.

But it’s a 50/50 proposition. It’s half creativity and art, and the other half is about business. You’ve got to learn how to be a business person so you better learn how to sell, you better know how to deal with business aspects of running a business, and how your clients run their businesses. If you don’t know that you won’t succeed in the business of brand design.

Why do you think this conversation has resurfaced and remains so relevant?

There’s a greater understanding in general all over the world with design, which is really a good thing. There’s a greater following because of social media and all these sites that evaluate design, and people have an opportunity to criticize design they don’t like, whether it’s a new logo for the GAP or whatever. It’s a newsworthy proposition. The Print piece with Tibor was controversial at the time, and it still is—or at least, it’s good reading.

The good news is, is that more and more people are concerned about good design, which is great for all of us designers.

Well, that leads to my next question: How has the design landscape shifted in the last 20 or 30 years from a corporate and branding perspective?

Well, that popularity that I just mentioned is obviously extremely important. This sounds contrived, because maybe it’s been said too much, but I think that young people today are willing to have less, but what they do have needs to be better. I’ve been doing a lot of work in the toy industry. People today, particularly millennials, are willing to spend more on better toys that are a better experience for their child, more educational, as opposed to having their house littered with hundreds of low quality toys that break. I think that’s the best thing about design today versus design 20 or 30 years ago. There’s a general understanding of what’s good, not only in the product design but how it’s presented, how it’s packaged, how it’s separated from other brands in any particular category.

The ad that sparked the whole debate was basically announcing your partnership with Michael Peters’ agency. How long were you affiliated with them?

One year. It goes back to this business understanding. Michael Peters, to me, was like Milton Glaser or Paul Rand. He was a hero. I loved his work and the fact that he was from London and had a great appreciation for design—that was incredibly intriguing to me. I was part of the advertising agency network at the time, with Fallon McElligott. My partners said, “Maybe it’s best if you’re part of a design network as opposed to an advertising network.”

I decided to sell, and I didn’t do my business homework. I didn’t look into exactly how Michael Peters was building this global network of design studios. I didn’t look into his financial issues and whatnot. He proceeded to go bankrupt within a year because he was buying companies too fast and he wasn’t doing the business part well. In order to avoid going through bankruptcy for two years in England, I literally paid everyone off at Duffy in Minneapolis and shut the doors. Then proceeded to create Joe Duffy Design, a new design company.

I think that’s the long and the short of the Michael Peters thing. It’s the business thing. Then it’s a cultural thing, too, because you have to reinvent yourself in the business of design, I think, on a regular basis based on what’s going on culturally and what’s happening in technology and all those other things. Honestly, half the time that I’ve changed, I’ve changed based on learning from mistakes, and I’ve made a tremendous number of mistakes.

Did you ever speak with Tibor again after the debate at the Print office in New York?

With Tibor, the thing that hurt the most was I really respected his design. The things that he was doing back then were breakthrough, many of them. When we walked out I said, “You know what, Tibor? I still really respect you as a designer, I’m still disagreeing with what you did and how you did it, but I wish you only the best.” We shook hands, he said, “Same here.” We never talked again after that day.