Brian Collins
Five Books That Made Me Ready for This Moment

Ray Bradbury once said, “You must lurk in libraries and climb the stacks like ladders to sniff books like perfumes and wear books like hats upon your crazy heads. ... may you be in love every day for the next 20,000 days. And out of that love, remake a world.” 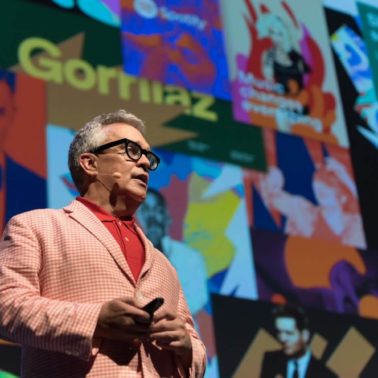 Have you ever considered how books have shaped you and your perspectives on life? Brian Collins has. He’s been a leader in the design world for the past couple of decades drafting product narratives for clients like Hershey, Vitamin Water, Spotify, and Archer Farms. It makes sense that he has been deeply influenced by great storytellers his whole life. To imagine how a brand will live in a world with so many competing entities, you need to have a vivid imagination and maybe some mystical influences, whether from classic literature, self-help and business books, or fantasy and sci-fi.

Like an epic page-turner that you can’t put down, a good brand compels its audience to come closer and engage. It pulls you in and makes you a believer. An avid reader, Collins knows this all too well and has applied it to his practice. He has become the storyteller.

Here, Collins tells us in his own words, about the books that have impacted him. Having worked in my town library as a teenager, getting lost in dusty bookshops across the world, and having built a 2,000 volume library in the center of our office in New York, my heart and imagination have been largely shaped by books. Among the books I love most, these five opened up new chapters in my life. The Wonderful Wizard of Oz

As a kid, I was mesmerized by the annual television broadcast of The Wizard of Oz. So I was awestruck when, at ten years old, I stumbled across a shelf of forgotten Oz books at my town’s library. I had no idea that someone had crafted an entire Oz universe filled with fantastical characters and lands. That summer I read them all. And I was reborn not only as a citizen of the Land of Oz, but as a child of that library.

Written in the late 19th century by L. Frank Baum, his first Oz book aimed to create an original “American Fairy Tale.” Every one of the books that followed enchanted me. On the beach. In the woods. On our front porch in the rain. With a flashlight under the covers. I could not put them down. They were packed with stories of self-determined children who persevered in the face of impending adversity. The kids thrived even when surrounded by hapless adults who failed them at every turn. I especially loved how the books converged familiar elements from fairy tales (wizards, witches) with real ones from American life (farmers, state fairs).

Some of the older boys in my neighborhood made fun of my endless reading. I didn’t care. I was busy battling flying monkeys.

The Oz stories packed an emotional wallop because they felt real. In fact, the books felt more honest than the 1939 MGM musical. In that version, Judy Garland as Dorothy wakes up from a dream and suddenly blurts, “… if I ever go looking for my heart’s desire again, I won’t look any further than my own backyard.” And then, worse. “And I’m not going to leave here ever, ever again…” Wait, what?
As a child this struck me as nonsense. The grim, sepia dust bowl of Kansas over Munchkin Land in eye-popping technicolor? Pigs, dirt, and barns over talking scarecrows and Emerald City? The ending of the book version, however, rang true to my ten-year-old imagination. “Instantly she was whirling through the air, so swiftly that all she could see or feel was the wind whistling past her ears…” Then she lands back in Kansas. “Dorothy stood up and found she was in her stocking-feet. For the Silver Shoes had fallen off in her flight through the air, and were lost forever in the desert.” This was no dream. And she had many more returns to Oz, ahead.

Last year, my colleague Hayden Lockaby gave me a new, beautiful edition of The Wonderful Wizard of Oz for Christmas. As I read the first chapter for the first time in decades, it became clear that I had absorbed the messages of Baum’s book very early on.

The Hero With A Thousand Faces

How far can you go in a day without someone mentioning Star Wars? I guess this far. Soon after seeing The Empire Strikes Back, I became enthralled by Jospeh Campbell, the scholar whose life’s work inspired George Lucas to write his space opera in the first place. In A Hero With A Thousand Faces, Campbell theorized that cultural myths across time and cultures, all follow the same basic cycle. “A hero ventures forth from the world of common day into a region of supernatural wonder: fabulous forces are there encountered and a decisive victory is won; the hero comes back from this mysterious adventure with the power to bestow boons on his fellow man.”

I love visual models to help explain complex stuff. So I was thrilled when this chart suddenly appeared on a page inside his book. It attempts to explain the complexity and nuance of his concept of the monomyth. Today, everyone at COLLINS is influenced by the vast scale of his ideas. Primarily their intense visual and narrative potency. We often—and carefully—use them to inspire better, more richly defined themes and ambitions in our daily work.

Obviously there‘s a lot more to his thinking than this chart. I suggest watching the first interview Bill Moyers did with Campbell in 1988. If your imagination gets hooked like mine did, pick up the book fast and jump in.

At 33, I found myself in a black tunnel. And I had no idea when the lights would turn on again.

Away from my family, in the middle of a long winter, living in a new part of the world with few friends, I had begun what turned out to be my first (and gratefully, last) full-blown, epic, soul-carving, humdinger of a depression.

I reached for books to help. Psychologist James Hillman turned out to be my guide over the next harrowing six months. His book, A Blue Fire, was my map through the dark. It is a potent introduction to Hillman’s work. In his essays—and through his work in Archetypal Psychology—he aimed to recognize the many fantasies and myths that shape our lives. If you read books seeking self-help, you’ll hate A Blue Fire. In excerpts from over 30 years of writing, Hillman looks at our messy minds and exclaims, ‘‘We would save the phenomena just as they are, untreated, uncured.’’ The way he sees it, our souls don’t need improvement. Instead they need to be explored more deeply. He asks us to seek a timeless, more objective ground of understanding in mythology and fables—as he sees the soul most vividly at work in imagination, fantasy, and metaphor.

He exhorts us to follow off-the-map, dark, twisty roads and trust in leaps of our imagination and decline the simplistic, pre-plotted goals of our ego. In these essays, Hillman brought me to a deeper knowledge of soul, both my own and in the Anima Mundi. This way we can take better care of ourselves and the larger world. Not to fix where we are broken or depressed, but so we can better see—and dance, write, sing and paint—our lives into richer meaning. In 1995, when I first arrived in San Francisco, I was invited to teach at the California College of Arts, then under Michael Vanderbyl. Shortly after I arrived in New York City, Steven Heller asked me to teach in the Masters Program at the School of Visual Arts. The remarkable Teaching to Transgress by bel hooks informed my work with my students at both colleges.

A writer, teacher, and black intellectual, bell hooks (all lowercase, she explains, to put focus on the work itself rather than the author) writes about education with passion and through a focused political lens. She believes that in teaching students to “transgress” against racial, sexual, and class boundaries they will achieve the gift of freedom. This, she believes, is a teacher’s most important goal.
She fires off tough questions aimed at the very heart of education: How should we rethink teaching practices in the age of multiculturalism? How should we deal with racism in the classroom? Sexism? Other forms of bigotry? What should we do with teachers who do not want to teach? What should we do with students who do not really want to learn? She wrote:

After teaching for over 20 years, I could not agree more.

Start Where You Are

We began COLLINS in the spring of 2008. I took our first crew, including Leland Maschmeyer, Timothy Goodman, John Fulbrook and Stephanie Segar, up to the Hudson River Valley to spend three days with Buddhist teacher Pema Chodron. I was hoping that Chodron’s wisdom could help us frame the journey ahead in a meaningful way.

COLLINS was, and still is, made up of hyper-talkative people. Chatterboxes. What we did not know then was that the retreat we were heading for was a silent one. No talking. No whispering. No notes. No phones. Silent.

All we were allowed to do was to listen to Chodron’s lectures. While we could ask her any question we wished, we could speak to no one else. Surrounded by 20 others who had come from around the world to study with her, my own crew would try to sneak in side conversations. And each time we would be shut down by Chodron’s other attendees. Instantly.

“SHHHHHHHHHHHH!” We had no choice but to listen. So we did. And it was extraordinary. The path is the goal, she argued. And on that path, one must lean into some terribly sharp points to move forward. Being comfortable all the time, no bumps on the path, meant not only no growth, but going nowhere new. She said, “Like all explorers, we are drawn to discover what’s out there without knowing yet if we have the courage to face it.”

Those three days stayed with me, and the following years changed me. A lot. I think for the better. By leaning in, I learned more about myself, each other, and our new company. The trip has not always been easy. But with fifty amazing people beside us now, it has always been amazing.

Start Where You Are, her book I bought on that retreat, holds a high place in our libraries at both COLLINS in New York City and San Francisco. “Fear is a natural reaction to moving closer to the truth,” Chodron says.

Looking back 40 years later, it appears the road made of yellow bricks had been pointing that way all along.

Steven Heller: “Am I Still Relevant?”

As the most prolific person in graphic design ever, Steven Heller is questioning his...