From a young age, James Victore wanted to be a poster designer—make that THE BEST poster designer in the world. But, after enrolling in the School of Visual Arts (SVA) in New York after high school, he soon realized that there were no jobs for poster designers. 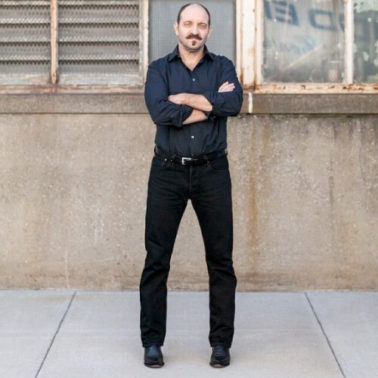 It didn’t matter. After being asked to leave SVA due to poor grades and poor attendance, he managed to find work designing book covers in the late 80s. At the time, it was a lucrative gig, but as is always the case with Victore, he wasn’t satisfied. Then in 1992, he designed and self-financed one of the most controversial, graphic posters—the dead Indian. This one poster launched him into the international spotlight and enabled him to in fact, be a poster designer.

His career was finally moving forward—he was traveling the world, designing posters and taking on more commercial design projects and making money. After ten years, he imploded. Victore will admit that he got too comfortable (which equals boredom), so it was once again, time to regroup and start making work that excited him as a designer. As always, he found his way back. He moved to Brooklyn and began creating meaningful work. And surprisingly, he started teaching graphic design at SVA.

After living and working in Brooklyn for 15 years, Victore along with his wife Laura and their young son Wyatt, relocated to Georgetown, Texas, outside of Austin. He’s happy, but certainly not content. I caught up with him to see what’s next.

What are you doing now?

My concerns these days are No. 1. Baby; No. 2. fixing an old house; and No. 3. world domination. I am working on upping the ante on my teaching—not universities but for working stiffs who need me. I’m a pretty good designer (at least the MoMA thinks so), but I’m a much better teacher. We are trying to focus on teaching creative courage to designers and artists. We are rolling out our first webinar and trying to find out how to grow the audience for our Burning Questions YouTube series. These things we take seriously and see a need for them.

How do you teach creative courage?

I teach courage by reminding people of who they are. Reminding them that their past, their story, their fears and their loves are all powerful and authentic places to come from. They just need to relax and be their weird selves and put it into their work. What do you love about teaching and why do you think you’re so good at it? I understand what it takes emotionally to put creative work out into the world. I know how to have an opinion and put it in my work. I do this because it resonates with a wider audience than if I try to ‘sell’ or ‘persuade’ people.

Tell me about Burning Questions and why it‘s so popular?

The following for Burning Questions is amazing. The numbers don’t nearly express the energy and commitment of its audience. We have followers from around the world who tell me almost daily how much BQ means to them and has changed their lives. My old assistant used to say, “You tell people things they don’t want to hear, in a way they want to hear it.” BQ is the reason we are launching our first live webinar, “How to be brave (and scared shitless).” We want to help our audience deal with the fear in their lives and its effect on their work.

Why do you think so many people are floundering and can’t figure out what to do?

Our industry changes all the time and keeping up with it is like chasing a bus cross country. We also change. The motives that drove us to become creative at 21 now have grown, developed and want more, different and uncharted. If I never changed careers, I’d still be doing book jackets for books I don’t care about with budgets fit for 10-year olds. I’m almost forced to seek more beauty and wealth and horizons.

Do you think social media contributes to this—i.e. it seems like everybody else is getting better projects/more money/more fame, etc.?

Wall Street is run by fear and greed. Social media is fueled by fear and ego— I know this because my ego is in charge of my Instagram account. From the outside everything looks easy and has a nice soundtrack (how’d they do that???), but the truth is we are all just making it up and trying to attract more attention as we go.

What do you think are the biggest mistakes you see designers make?

I don’t hear a lot of voices these days. I like work that has an opinion, that comes from a singular place. A lot of designers are good at making the obvious, obviouser, but not many are good at expressing their opinion in their work. All pasta—no sauce.

At what point in your career did you really feel satisfied and happy with it all?

What was your lowest point in your design career?

Here’s the thing, I only have a low point in my career, even my day, if I accept the idea of even having a low point. I try to come from the perspective that there is no good or bad … it all just IS. I could EASILY look back and moan about some inconsequential crap, like money or clients or getting work killed, but I don’t. To me it’s all just part of the game. There is no failure.

What is your favorite book or favorite character from a book?

Wow. My mind just raced through a library of works to talk about. For this purpose, I’ll choose a character—actually multiple characters from different Shakespeare plays. The fools. In most Shakespeare plays there is a character who plays the fool—his job is to give some backstory and share information between the major characters. The funny thing about the fools is that they are generally the wisest characters in the play … AND they are the only ones standing alive at the end. I like the fools.

I could EASILY look back and moan about some inconsequential crap, like money or clients or getting work killed, but I don’t. To me it’s all just part of the game. There is no failure.

Looking back on your career and life, is there anything you would do differently?

Looking back is a trap. I could say that I wish I had a million dollars, but the amount of shit I would have to swim through for that wouldn’t come near the reward. Recently I was talking to some designers about “if I were to start over” … and I think If I were to start today I would choose an even harder, MORE Piratical direction. Push. Push. Push. Never say ‘uncle’ never give in.

Where in the world is your favorite place to visit and why?

I like Barcelona. I love Paris. I love food. And wine. I used to love visiting Texas, but I live here now.

Does anything in advertising/design surprise you any more?

Good work. That always surprises me.

You’ve famously written quotes on portraits over the years, so what quote is your favorite and why?

People have lived these lives before and left us some directions. Their quotes are our access points. I’d like to do a good job at this life, so I try to heed those who’ve gone before. As far as favorites … Rumi and Kurt Vonnegut seem to be the clearest thinkers that have ever breathed. They remind me that this life is fun—don’t take it so seriously. Henry David Thoreau also gets me riled up and makes me want to break things.

What is your favorite curse word?

What’s the best thing about living in Texas?

Being able to focus on my family AND as I write you, I am looking over 50 acres with deer, turkeys, jackrabbits and a pond… so there’s that.

Scott Dadich: The Making of the Netflix series, “Abstract: The Art of Design”

If you haven’t yet watched "Abstract: The Art of Design," which features eight extraordinary...