Woody Pirtle’s design resume is enviable. He started his first design practice in Dallas, Texas in 1978, then in 1988 he merged Pirtle Design with Pentagram, and became a partner in the New York office, where he remained for 18 years. Then in 2005, he left Pentagram, moved upstate to New Paltz, and re-established Pirtle Design. 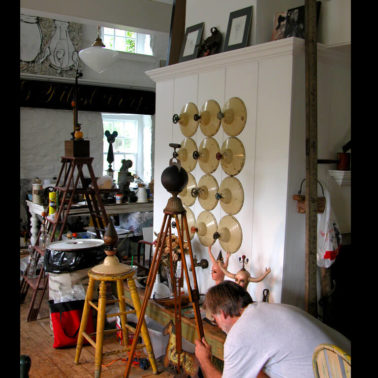 He does client work for Amnesty International, Modern Farmers magazine, and Rizzoli, among others, and he’s having fun with personal projects. He and his wife own a complex of early 19th century stone buildings that were part of a textile mill on the Wallkill River. “During the process of historic restoration, we unearthed countless items that had been discarded or abandoned,” he explains. “We found fragments of dinnerware, circular saw blades, porcelain dolls, clay pipes, early glass bottles, hinges, locks and much more. I began to collect the items that I was particularly interested in and gradually began to put them together.”

This interest in creating art with objects that seemingly don’t go together has become an obsession for Pirtle, and something he calls “Design in Reverse.” Here, he talks about this process and what inspires this sort of schizophrenic pairing of abandoned items.

What does it mean to design in reverse?

What I refer to as “Design in Reverse,” is a body of personal work that is based on the repurposing of a variety of printed material; newspapers, ads, labels, tickets, billboard paper, and other graphic ephemera, to create collages. I also create assemblages incorporating found objects, such as wheels, gears, containers and all kinds of industrial detritus. My inspiration comes from the feeling I get from repurposing material that in its current state is useless. I love seeing beyond what I am looking at, and envisioning what it might become. When it rained, I used to drive around with garbage bags and find billboards where the paper is coming off, and I’d collect it.

What is interesting to me about this process is that by taking material that has served its purpose and has been discarded, bits and pieces of this now useless refuse are given renewed life and relevance in a newly considered context. Saw Phonograph: The buildings that make up my home and studio were service buildings for a textile mill across the river. They would unload the stuff and bring it inside and people from the mill would come over and eat and have drinks. As we went through the renovation of these buildings, we found that if something was broken, they would just throw it on the land. That’s where this saw blade came from. I attached two phonograph horns to it and put wheels on the ends. Again, it’s two things that don’t go together, but in the end make an interesting piece of sculpture.

Is this something you’ve always applied to design projects?

No, but I have always tried to juxtapose unrelated images in order to create powerful, unexpected visual solutions to design problems. As a young designer, I became intrigued by the things I could make by cutting up discarded printing plates and making metal objects from the pieces.

I had this chair and it didn’t have a seat, but it had such a nice patina, so I created the seat with this old collection of wood type. I made the table with the glass top and the roller to ink up the seat so people could sit on it and make prints.

How do you identify things to pair?

I usually find one piece that I am really drawn to, but don’t know what I will eventually do with it. Then I find another and make the mental connection that the two pieces should be combined.

In a sense, as a designer, do you always have to think this way—the reverse of design?

No, I feel as though it is just one segment of the methodology that I call upon to effectively approach and solve design problems. Enlightened Horn: I thought it would be cool if I could make a lamp with a phonograph and a piano stool. The red thing holding the two the pieces together is one of those things that you put on a dumbbell to hold the weights on. I had a schoolhouse lampshade and I turned upside down and it just happened to fit inside the horn. I needed something to finish it off, so I found these wooden balls and painted them and put them together on the top. I painted the black cord with those white alternating strips to make it more interesting.

Have you seen any other great examples of this by other people?

Yes I have. There are many examples, but I’m particularly interested in the work of Spanish artist, Isidro Ferrer. Much of his most interesting visual work is either collage or assemblage. I’m also drawn to the work of American artist, Noah Woods, who incorporates collage in many of his most successful visual images.

Are you a hoarder?

[laugh] Pretty much. My wife and I used to collect antiques and put it in our home, but a lot of it ends up in storage. We used to do the Pier shows in the city, where we set up a booth to sell stuff. But while we’re at the show, we’re buying stuff, so we end up going home with more than what we came with. I bought this pitchfork at a flea market because I thought was beautiful. It was so well designed—probably from the Victorian Era. I took it home and it sat around until I found the horn. Once I have a bunch of stuff sitting around, one thing is drawn to the other.

The Rules According to Snask

When Fredrik Öst and Magnus Berg formed their design collective Snask, they were a...