Gael Towey
A Life in Stories Beyond Martha Stewart Living

After spending nearly 22 years at the creative helm of Martha Stewart Living, Gael Towey left in late 2012 to pursue something different, though she didn’t know what that would be at the time. She and Martha had practically invented the DIY revolution, encouraging their readers to craft their own lives, from cooking to sewing to entertaining. Towey led the brand strategy for everything Martha, including magazines, books, and products. 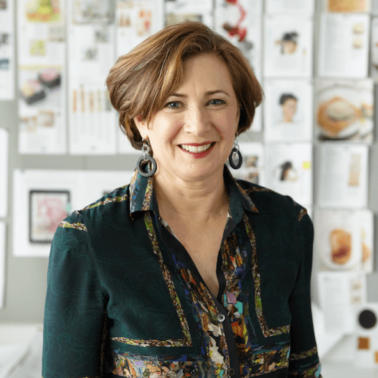 She took a much needed hiatus for six months, traveling, spending time with family and friends, and pondering her next move. Since Towey is so adept at storytelling, she decided to do documentary shorts, thus she started her next venture, Portraits in Creativity, which features artists and artisans doing what they do best. It’s an intimate look at the creative journey, through the experiences of the makers.

Here we talk to her about the creative journey from Martha Stewart Living to now, and the inherent challenges and benefits of being so intimately linked to a brand everyone identifies with.

How did your collaboration with Martha Stewart start?

Martha and I met at Clarkson N. Potter, where she was publishing her books. Entertaining was published in 1982, and I was hired shortly after because the editors realized that color decorating books and cookbooks were going to be very popular. I was their very first art director and a few years later Isolde Motley became Martha’s text editor. The three of us worked together there for years.
Martha wanted to create a lifestyle magazine, so she took her proposal around to all the publishers, and Time Inc. said they’d do it as a trial—a newsstand test. Isolde, Martha, and I did the first issue in 1990, and it went on the newsstands as a special Christmas issue. It sold extremely well, and we started doing a quarterly edition of the magazine, which eventually turned into 10 times, then 12 a year. It was very much teamwork driven, and Isolde, who was Editor in Chief, was also a big part of that. I was the art director for five years, and then we started our product catalogue called Martha by Mail, and we published Everyday Food magazine, and the Baby magazine. After that we started a product line with Kmart called Martha Stewart Everyday. That is when I became the creative director of the company, and I started building in-house product design and marketing teams.

Was it hard going out on your own after being at Martha Stewart Living for so long?

It was time to go. I knew that they were going to downsize and start closing magazines, and I didn’t really want to stick around for that. It was the end of 2012, I had just turned 60, and I thought, I’m still young and energetic and have lots of ideas, I need to have time for myself so that I can do something that’s really from my heart.

I’m so glad that I had the nerve to think that I could do something for myself. When I left, I didn’t know what I was going to do.

I knew I wanted to keep working but I gave myself six months to just decompress, travel, get together with friends who I had not seen in a long time. I almost never had time go out to lunch with friends for 22 years! That’s a slight exaggeration, but being able to do that opened a world of building relationships, and reconnecting and networking, which is good. I needed that.
I had amazing experiences at Martha Stewart. I was there for all the inventions and creativity and I feel enormously lucky. I learned so much and I was exposed to so much. Some of my happiest days at Martha Stewart Living were out shooting stories around the country: flowers and gardens, profiles of farmers, chefs and entertainers. Whether it was shooting peonies in Illinois or cheese making in Vermont or a new chef in Colorado, the opportunity to get around America and learn about makers and growers was enormously gratifying. I worked with incredible photographers, editors, and stylists to create our iconic photographs and tell stories in visually stunning ways.

At Martha Stewart I learned about creative, visually seductive storytelling. I bring that sensibility into my Portraits in Creativity series, where I have tried to capture the essence of a person in a profile that is only eight to twelve minutes long. How does Portraits in Creativity work? Tell me about this business.

Initially, I started Portraits in Creativity to create a portfolio. I know that sounds weird, having been in the business for such a long time, but my identity was so tied up in everything Martha Stewart and I needed to prove that I wasn’t just a Martha Stewart designer and editor.

The last couple of years at MSL, we started doing a lot of videos, because we were creating a magazine that you could download on the iPad. It just turned on a switch for me, because I always loved storytelling. So being able to do a video story about fishing for salmon in Alaska, for example, with moving footage and personal interviews struck at that combination of emotional storytelling that was both informative and beautiful. That really excited me, but a lot of those videos were very how-to and they were very logical progression of storytelling.

The idea of doing Portraits in Creativity was different because these more personal stories about how artists develop their own creative process are not linear. I started with my long-time friendships with people like Maira Kalman and Roseanne Cash. They introduced me to other artists and artisans. I understood that people want creativity in their lives and they want to learn how artists access those undiscovered places within themselves. I had this real visceral understanding of the importance of creativity and the desire to unpack what makes artists tick, what gives them their inspiration, what their process is, how they think through the writing of a song or the making of jewelry. I reached out to artists who interested me to ask if I could do short video stories about them.

I reached out to photographers who I had worked with, but who had not done video and wanted to make that transition from still photography to video. I funded the first four videos myself, calling in as many favors as I could. My 35 years of editing pictures and imagery and the concept of the story idea has been invaluable doing these videos. What do you think is the most important thing you’ve learned while doing this series?

Personally, I’ve learned that you can do something you’ve never done before even though you’re scared to death to do it, and even if you don’t know how to do it.

You must be able to put one foot in front of the other and just start. Just experiment and take that risk. I had this idea, and I was incredibly insecure about it because I had never done it before. However, because I did a lot of storytelling in magazines, the transition to video felt incredibly natural to me. There is still so much I do not know—I am still learning.

What’s next for you Gael?

I’m actually working on a full-length documentary right now about photography in the ’60s, ’70s, and ’80s. I can’t tell you more than that. I’m still in the very early stages of shooting and planning. I’m just starting to put the pitch film together so that I can take it around and raise funds for it.

As Senior Partner at one of the world’s leading branding agencies and current president...

Margo Chase: The Future of Packaging

Remember CDs and records and the great packaging they came in? Not only was...