You may be wondering what the hell this title means. It’s obvious that design and advertising comingle, but often the nuances go unnoticed. Michael Ian Kaye is here to say there are obvious distinctions between the art and craft of graphic design and the fast-paced world of advertising. 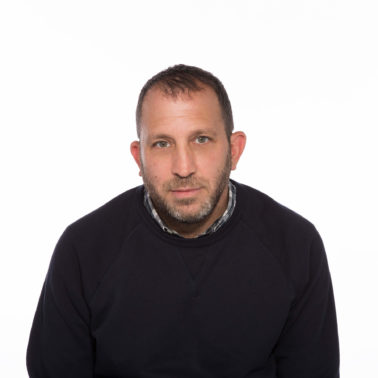 He should know. He leads the design team at Mother Design, the official design arm of Mother New York, a branding and communications agency with clients like Target, Nasty Gal, New York Fashion Week, and Sundance Film Festival.

Here, Kaye talks to us about how design and advertising are different, how ads can be misleading, and how social media levels the playing field for all.

What, to you, are the main differences between design and advertising?

I think it’s the desired outcome, frankly. I do feel like advertising is created with a sense of trying to make an immediate change. A quickness. A reason. Put this ad out in the world and create this action.

Design is a bit of a slower burn. Create this artifact that becomes the representation over a longer period of time. I think the intent—though it gets blurry in the middle—is a bit different. Both in terms of what the objective of the pieces out in the world are, and in the process to getting to those pieces.

Don’t you think that effective advertising is really based on good design?

There’s a hell of a lot of advertising in the world that doesn’t employ good design, and I think that’s always been a passion point for me—understanding how many visual assets the advertising community puts out, and if they employ the best design practices.

I’m a graphic designer by trade, and sometimes I feel as though a lot of advertising design borrows design equity and doesn’t necessarily cultivate it.

What do you mean by that?

For example, say there’s a cool graphic designer who makes bubbly typography that everybody is now loving. Maybe we use that designer to make our typography for our commercial a little bit special, versus, we’ve got this bubbly beverage. It would be great to find a designer who thinks in this more optimistic, poppy space, and have them develop a visual language that’s based on the idea of this product.

I think that that’s where advertising gets into a slightly gray area. Let’s hire this person because they do that, versus this job needs this, so let’s find the best person to help us to bring that to life.

One of the biggest advertising missteps recently, was the Kendall Jenner Pepsi ad. The outrage and reactions on social media proved how quickly a campaign will dissipate based on that immediate reaction. What are your thoughts on that?

It’s funny. Everybody now has either influences or faces to legitimize their brand within their area of reach. I think that the Kendall Jenner Pepsi fiasco wasn’t necessarily a problem, in that the face didn’t align with the brand values. The problem was that it was a misinformed advertising conceit.

I think that it’s a drag that Kendall agreed to do something with little understanding of the cultural barometer of what creating that storyline might do—the notion that she could leave a photo shoot and become part of a revolution of coming together—is just banal.

I’m sorry. That was judgment. I’m not supposed to be judging here.

Well, you’re not alone in that thinking.

For me, it’s not that faces and influence can’t be a force for good when aligned with the right brands and right ideas. I’d love to know whether that stuff sticks with people any more, or whether all PR is good PR in some ways, as people sometimes say, or whether there really is now a problem at Pepsi. People have such short attention spans, that when something goes bad, does it even affect a brand anymore?

The frequency, that’s another thing that has changed so much about the communications landscape. Really, if on Monday something goes a bit negative, by Friday there’s three to five other messages out in the universe that can change that.

I can’t speak specifically about the brands, but when there are a core group of people who feel as though a brand’s values don’t necessarily align with theirs, they can do damage by staying on point and rallying a collective mindset. It’s not dissimilar in politics, in terms of certain people being elected, where we thought in no way, shape, or form could that ever happen.

That’s part of my thought here. There are people who are fiercely loyal to their brands and politicians, and those brands (or politicians) can get away with anything, and it doesn’t seem to sway their following.

We talk a lot, from a strategic point of view, about loyalty. It’s not the same as it was in the late ’90s or early 2000s, when people really aligned themselves to a brand or a way of thinking. People are much more fickle these days. I think gone are the days where Apple truly has loyalists in the way they did 20 years ago. I would say the same thing about Nike.

Those brands were cultish at some point, and now Apple feels a bit more like Cuisinart, in that it’s something you need, not something you want.

Right. And there are also so many more products out there to choose from, and if you look at the food category, for instance, quality trumps messaging—at least to me.

I’m similarly aligned there, but what happens is that people or brands see those trends in terms of people wanting products that are good for you. Then they begin to put that veneer on brands that aren’t so good for you. Then that becomes a slight misrepresentation of those brands. That’s frankly, where the values behind what I do in advertising become questionable. It’s when we are trying to take things that are in the current cultural zeitgeist and apply them to brands that don’t have the right to play in that space, which is actually what that Pepsi thing was all about. It didn’t really have the right to play in that space, using that moment to represent them in an earnest way. All the stars were misaligned.

One of my first advertising projects was working on the communications for BP when they changed their identity from the shield to the flower. Having worked on that project is one of the things that I regret most in my life. I was briefed by a company who said, “We are doing everything possible to be good to the environment. We’re the world’s largest producer of solar energy.” We created an advertising campaign that was all about “beyond petroleum.” Then five years later, one of the largest oil spills in recorded history happened, and my having been part of something that was so misaligned with what a brand’s core function in the world actually is, is an awful thing to have done. You’ve stated, “My preciseness is both my greatest strength and weakness.” What do you mean by that?

I think as a creative person, one can never truly realize their vision in terms of craft, and in terms of efficiency of all these elements coming together to create a moment in time. My craft, the craft of design, is something that usually takes longer than the cycle of creating advertising. You can work on a brand identity assignment for maybe six months. A lot of things that we put out into the world, in terms of advertising, we may only have a month, two months, sometimes less. The level of craft that I want to bring, the level of preciseness, sometimes can’t manifest itself in that time. Sometimes I try so hard, that it puts a burden on the teams and the people that I work with to get to that level of craft in that short period of time.

I think that it’s my friend. It’s my best asset, because it gives me a north star, something to strive for. It’s my worst enemy, because it’s the thing that’s sitting over my shoulder as we’re trying to do things in a quick time table.

Is it good enough? Is it right enough? Sometimes it holds me back a little bit from putting that stuff out into the world in the way I’d like it to be seen. Or it doesn’t quite get to that level.

Do you think you’re hard to work with?

It depends. There are many people who love working with me because of the full vision that I try to bring to the table for my clients, and my ambitions with the world. I feel like there’s a lot of rigor that isn’t for everybody. The thoughtfulness, the versioning, the inclusion of design at a very early stage in the process for solving problems, isn’t something that everybody’s well versed in.

But I have many partners in crime who have similar beliefs around brands and communications, and when we rally as a team we can put stuff out into the world that truly changes peoples’ perception of a brand or culture, or even change perceptions of aesthetics and ideas in general.

When Cindy Gallop introduced her social sex start-up concept to a live audience in...

Alex Fowkes: on Lettering the Landscape

Patience, solid footing, and a steady hand are important tools for a lettering artist...